A Roadmap for Peace 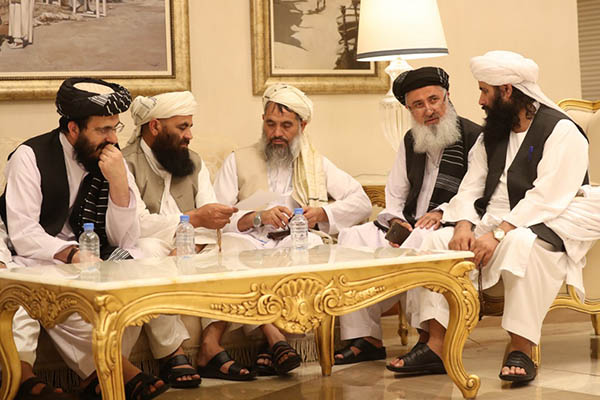 Dozens of influential Afghans concluded two days of talks with the Taliban on Monday in Doha, laying the foundations for renewed negotiations between the United States and the militants.

The encounter ended with a joint statement pledging a “roadmap for peace” based on the opening of a monitored peace process, return of internally displaced people, and non-interference by regional powers in Afghanistan.

“Assuring women rights in political, social, economic, educational, cultural affairs as per [and] within the Islamic framework of Islamic values,” also featured in the joint text. “It’s not an agreement, it’s a foundation to start the discussion,” said delegate Mary Akrami, executive director of the Afghan Women’s Network. “The good part was that both sides agreed.”

The Taliban’s Amir Khan Mutaqi, a former minister during the militant group’s 1996-2001 rule of Afghanistan, read a Pashto version of the roughly 700-word statement. Habiba Sarabi, deputy chair of the Afghan High Peace Council established by former president Hamid Karzai to engage elements of the Taliban, read the Dari equivalent.

Around 70 delegates attended the gathering at a luxury hotel in Doha and the large meeting room erupted into applause after the joint statement had been read out shortly before 2100 GMT. “The differences is almost so narrow… we are quite frankly surprised how serious both sides are and they are so committed to putting an end to this conflict,” said Qatar’s counter-terrorism special envoy Mutlaq al-Qahtani.

The so-called intra-Afghan meetings follow six days of direct U.S.-Taliban talks that were put on hold for the two-day Afghan conference. The flurry of talks will continue with the resumption of direct U.S.-Taliban contact also in Doha on Tuesday as both sides eye a resolution to the bloody 18-year conflict.

Washington has said it wants to seal a political deal with the Taliban ahead of Afghan presidential polls due in September to allow foreign forces to begin to withdraw.

U.S. lead negotiator Zalmay Khalilzad has said that the latest round of U.S.-Taliban talks “have been the most productive of the rounds we’ve had with the Talibs.” He told reporters on the sidelines of the dialogue on Monday, “We want a stable Afghanistan. Afghans meeting with the Taliban was a big success.”

The Taliban said they were “happy with progress.”

The United States did not participate directly in the two-day Afghan summit, which was attended by political heavyweights, government officials and at least six women. The Taliban have steadfastly refused to negotiate with the government of President Ashraf Ghani, members of which only took part in a “personal capacity.”

Ghani’s administration, which the Taliban consider a puppet regime, has also been excluded from the direct U.S.-Taliban talks.

Sunday and Monday’s gathering was the third such meeting following landmark summits in Moscow in February and May. An agreement with the Taliban is expected to have two main pillars—a U.S. withdrawal from Afghanistan and a commitment by the militants not to offer sanctuary to jihadists.

The Taliban’s relationship with Al Qaeda was the main reason for the U.S. invasion nearly 18 years ago. But the thorny issues of power-sharing with the Taliban, the role of regional powers including Pakistan and India, and the fate of Ghani’s administration remain unresolved.

The Taliban, believing they have the upper hand in the war, have kept up attacks even while talking to the United States and agreeing to the Afghan dialogue. A Taliban car bomb in eastern Afghanistan killed at least 12 people and wounded scores more on Sunday, officials said. Despite the violence, both the Taliban and the U.S. have been positive about their engagement.