Home Lightbox A Rock and a Hard Place 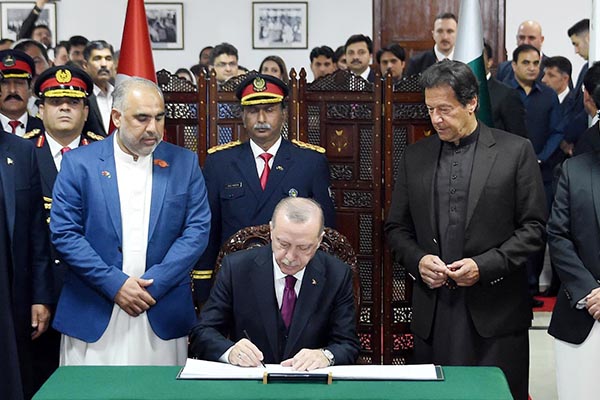 Is Islamabad better served by siding with Turkey or with the Arab states Ankara is often at odds with?

A new order is about to envelope the world: elected “heroic” leaders with no real democratic opposition in sight. Three leaders come to mind immediately but there may well be more who boast little to no accountability for their actions.

In Pakistan, Imran Khan rules with practically no valid opposition in sight; Narendra Modi similarly has no viable opposition in India’s more or less bipartisan system; and in Turkey, Recep Tayyip Erdogan rules without any hindrance from opposition leaders, many of whom are languishing in prisons. The only element that would worry a Pakistani is that, out of these three, Imran Khan is the only one sitting atop a virtually dead economy.

Pakistan’s other misfortune is that Prime Minister Khan might have backed the wrong horse in his foreign policy race—if we are to consider it solely from the angle of Islamabad’s ties with Gulf states—implicitly supporting Turkey against the Arabs, while India has played its cards more carefully with the Arabs and Israel collectively joining ranks behind Delhi’s growing economic leverage in the Gulf region. Erdogan, meanwhile, has taken on the Arabs without pleasing Iran, which needed someone to chastise the Arabs in the Middle East’s ongoing sectarian war. In fact, he has seriously challenged Iran in Lebanon by aiding Sunni Muslims trying to face up to the muscle of an Tehran-backed Hezbollah.

There is hardly any doubt that Khan neglected to study the consequences of taking on the Arabs through his friendship with Erdogan. To get state-owned PTV out of its doldrums, the PTI licensed and broadcast an Urdu version of Turkish drama Ertugral, without concern that any remembrance of the centuries of Ottoman rule over the Arabs would be taken poorly by Pakistan’s Gulf friends. The U.A.E. and Egypt—fighting a proxy war against Turkey in Libya—have unsurprisingly banned Ertugral. Pakistan thinks it can survive by having normal relations with the Arab states of the Gulf on the one hand and Iran on the other; it needs to realize it cannot do this easily so long as Turkey is also fighting Iran in the Middle East.

Lebanon is the venue of the Iran-Turkey war. On July 4, two Syrians and two Turks were arrested in Beirut as they attempted to smuggle $4 million into the country on a flight from Turkey. Lebanon claimed the money was meant to finance “violent street movements,” and that “instructions” had been sent from Turkey to anti-government protesters in the country.

Anti-Turkey feelings are therefore naturally in evidence in Lebanon, where Christians are a single community while the Muslims are divided into Sunni and Shia “nations.” Alleging that Turkey was funding several pro-Turkish nongovernmental organizations and mosques, politicians have alleged that Turkey is actually planning to occupy Tripoli. The political landscape in Lebanon goes somewhat like this: “Iran has Hezbollah, with its political influence and militia, while Saudi Arabia has sway over some of the largest blocs in parliament, from former prime minister Saad Hariri’s Future Movement to the Christian Lebanese Forces.”

Turkey has tended to be aggressive in the Middle East and in the Mediterranean because it had an economy that could sustain this aggressive policy. Despite a recent downturn, its economy is well set to rebound once more after the discovery of oil in the Black Sea.

Since President Erdogan’s visit to Beirut in November 2010, Turkey has invested in rehabilitating Ottoman-era symbols, among them the Tripoli train station of the historical Hijaz railway. It has also opened cultural centers where thousands of people are learning Turkish. By 2019, 18,000 Lebanese had applied for Turkish citizenship, and just over 9,600 had received it. This “soft power” threatens both the Arabs and Iran funding their increasingly hostile communities. Of course, Sunni Turkey could have faced off against Iran in Lebanon together with the Arabs—Lebanese Sunnis and Shias speak Arabic—but it has chosen to take on both, leaving Pakistan sitting uncomfortably on its bed of thorny choices.

In Lebanon, Christians always take the presidency, while the Sunnis take the premiership and the Shia appoint the speaker of parliament. Traditionally, the Sunni Arabs stood behind the prime minister while Iran has been accused of funding the Shia through Hezbollah. The entry of Turkey on the scene has complicated the issue. Saad al-Hariri, Lebanon’s former prime minister, looked to the Arabs as well to the Turks for support against Hezbollah: he even attended the wedding of Erdogan’s daughter.

Pakistan’s distancing from the Gulf states at this juncture—when so many are recognizing Israel—must be credited as a principled position reflecting the aspirations of the Palestinian people. At the same time, there is no doubt that Pakistani and Turkish people feel a special bond. In pre-Partition India, Muslims were united behind the Turkish caliphate after Kamal Ataturk abolished it. Was that Khilafat Movement also a “wrong choice”? In case we forget, Pakistan’s founder, Mohammad Ali Jinnah, had refrained from supporting it because he believed Indian Muslims had no link to it. Mahatma Gandhi, meanwhile, put his full support behind the movement to save the Turkish caliphate.