Home Latest News A Sense of the Grave

A Sense of the Grave 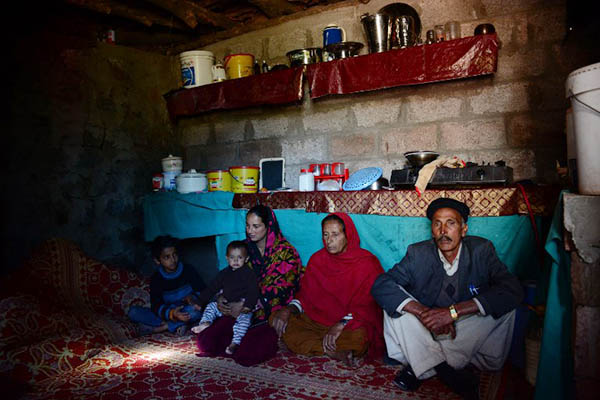 Chaudhry Hakam Deen has a bunker—a cold, damp hole dug in the ground—next to his home where he and his family have often taken refuge amid soaring tensions with India. Spending the night inside, he said, “feels like sitting in a graveyard.”

The shelter dates from the Kargil conflict, a skirmish between India and Pakistan in disputed Kashmir in 1999. Twenty years later, the nuclear-armed neighbors are again at loggerheads.

The latest crisis was sparked by a Feb. 14 suicide bombing in India-Occupied Kashmir that killed 40 Indian paramilitaries, and was claimed by a Pakistan-based militant group even though it was perpetrated by a local separatist.

In its aftermath, New Delhi and Islamabad launched tit-for-tat airstrikes on each other’s territory, igniting fears of fresh conflict in South Asia.

The nuclear-armed neighbors regularly send shells and gunfire across the de facto border in Kashmir, known as the Line of Control, or LoC. But as they stumbled to the brink of war in recent weeks, there was a surge in the already-heavy firing, and families such as Deen’s found the bunkers a miserable refuge.

Deen’s shelter, a stone’s throw from his house in the village of Dhanna some five kilometers from the LoC, is as tiny as it is uncomfortable: just four feet long and three feet wide.

Most adults cannot stand beneath its low ceiling, forced to sit or squat on cardboard or carpets, huddled around a mud stove whose smoke makes the inhabitants cough.

“When shelling starts we take our children… inside the bunker,” Deen says, looking down. “They don’t have strength in their legs to even walk to the bunker, they don’t eat anything inside out of fear,” he adds.

For his older brother Chaudhry Maqbool, being in the bunker is worse than just being in a cemetery: it feels like sitting in a grave itself.

The white and blue walls of Deen’s home are studded with holes, some the size of a fist. One shell landed in his kitchen, while another broke an outside door. He has piled sandbags at the entrance to his bunker. But in the event of an explosion, the packed earth walls and the roof of branches and plastic sheets may not be enough to protect those huddled inside.

Several civilians and soldiers died in the recent shelling on both sides of the LoC.

In Dhanna, the shelling was so intense that most of the 2,000 villagers fled. Only a handful stayed to protect their property. A correspondent saw a dozen houses, a health center and a service station that had been hit by the Indian strikes.

The women and children of Deen’s family were finally evacuated to the nearby town of Kotli, which was less exposed.

Tensions may have eased for now, but overall the shelling has increased dramatically since 2016, and locals fear worse is to come. “This is a valley of fear. Life is at a standstill here,” said Sardar Javed, a local journalist. “When people hear a sound they become nervous. They don’t know what will happen to them the next moment.”

Another resident, Ulfat Bibi, simply fortified her house, reinforcing the thickness of the walls and ceiling. Still, the grandmother in her 50s says, each time the shelling begins it feels like the “world has come to an end.”

She and her family cannot flee, however, for fear of losing their two buffalo—their only assets.

At Bibi’s side, her 35-year-old daughter-in-law, Jameela Akhtar, is holding her two children, aged two and five. Their eyes look into the distance, and they appear afraid. They “are so terrified that they have become psychotic,” their mother says.