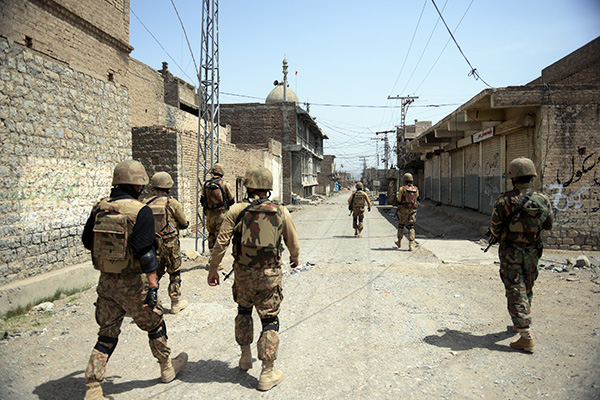 Despite amendments, Pakistan’s new counterterrorism law is open to abuse.

The Protection of Pakistan Act, recently signed into law by the president, remains open to abuse and—going by the conduct of security forces as well as many possibilities of misjudgment, human error, and other structural problems—will be abused.

The Protection of Pakistan Ordinance was promulgated in October, extended in January, hotly contested in Parliament, and passed the Senate only after many of its provisions were amended (a sunset clause was added, which means the law will lapse after two years). Amendments aside, the law has already been criticized by rights groups. While their approach is pegged on individual rights and liberties, the law is also problematic from the perspective of the collective-security framework.

Let’s first test it on what I would call a sympathetic approach (“extraordinary circumstances require extraordinary measures”). Romans practiced the concept of iustitium. Georgio Agamben in his State of Exception describes it thus: “Upon learning of a situation that endangered the Republic, the Senate would issue a senates consultum ultimum [final decree of Senate] by which it called upon the consuls … to take whatever measures they considered necessary for the salvation of the state … [Let them defend the state, and see to it that no harm come to the state]. At the base of this senates consultum was a decree declaring a tumultus (that is, an emergency situation in Rome resulting from a foreign war, insurrection or civil war), which usually led to the proclamation of iustitium [which]literally means ‘standstill’ or ‘suspension of law’ [and] implied, then, a suspension not simply of administration of justice but of the law itself.”

A further problem has to do with situating the issue “at the limit between politics and law,” what François Saint-Bonnet has described as a “point of imbalance between public law and political fact” and Alessandro Fontana posits as a problem situated in an “ambiguous, uncertain, borderline fringe, at the intersection of the legal and the political.” But the problem, even if posited thus, does not disappear. As Umberto Eco argues in his Tanner Lecture, “The legal standard is modus, but the modus is also the limit, the boundaries … If boundaries are not recognized, then there can be no civitas.”

The issue of borders or boundaries becomes important because if exception is begotten of crises, it must therefore be “understood on political and not juridico-constitutional grounds.” The paradox then is that these will be “juridical measures that cannot be understood in legal terms, and the state of exception appears as the legal form of what cannot have legal form.”

Agamben’s position is that, “On the other hand, if the law employs the exception—that is the suspension of law itself—as its original means of referring to and encompassing life, then a theory of the state of exception is the preliminary condition for any definition of the relation that binds and, at the same time, abandons the living being to law.”

If without a recognition of boundaries there can be no civitas then it is imperative to ask the question of what it means “to act politically.” Put another way, how does reducing individual civil liberties work toward enhancing collective security? Or, how does making people less secure make them more secure? This is the essence of the title of Derrida’s essay Force of Law where Law is crossed out.

It is my considered opinion that the Protection of Pakistan Act which was hastily drafted does not consider any of the questions that scholars have raised in relation to the state of exception or, to put it in Anglo-Saxon terms, emergency provisions.

Sure, there are existing constitutional provisions to that end. Proponents would argue on their basis. They will raise necessity. They will point to laws in other countries, including in the U.S. and the U.K., etc. They will speak of the sunset clause, and of extraordinary times requiring measures out of the ordinary. They may even refer to this very debate going back to Roman times. All of that would be legitimate.

And yet, these arguments miss two essential and interrelated points: one, as discussed above, how a theory of state of exception can be developed and linked to public law; and two, what evidence can be presented to support the not-so-hidden assumption that making ‘legal’ provisions less accountable will deal with the problem, in this case terrorism, more effectively.

Even if we leave aside the first point as a hopeless exercise in a society that puts little premium on sophisticated thought, the second point still stands. What evidence can be presented to show that reducing civil liberties will make the criminal-justice system more efficient, especially when its inefficiencies are structural and lie outside the debate over whether we have enough laws?

In fact, pressing ahead with the structural argument means that toughening the laws, far from addressing the problem of terrorism efficiently, will likely end up making it worse. Yet another problem with giving more powers to the security forces without enhancing their capacity for sophisticated counterterrorism work will mean use of brute force, torture and avoidable incarcerations. As anyone who knows even the basics of counterterrorism will testify, ham-handedness does not translate either into effective policing or into effective counterterrorism. This does not mean that a state mustn’t revisit some its laws. It should. But revisiting existing laws and rationalizing them is an exercise very different in nature and character from slapping on the people an act which its proponents present as some kind of silver bullet which will take care of the problem. In essence, this means that while the system cannot handle a knife, it must be given a machinegun to deal with the problem.

Take another example: while this act is somehow to take care of the problem, no effort has been made to reform the police. The National Internal Security Policy, presented to the public with some fanfare on Feb. 25 remains a monument to oblivion. At this point I shan’t even go into its many weaknesses because that is another debate. Nor does the NISP seek to reform the police as it should. It also has no clarity on the essential nexus between effective policing and effective counterterrorism. That said, shouldn’t the federal budget have allocated money to make the NISP a reality? Not a dime has been allocated to it and yet the Protection of Pakistan Act in some miraculous, standalone fashion, by curtailing civil liberties, is supposed to make the problem of terrorism go away.

The worst argument that the proponents present in support of this terrible measure is that these abuses have gone on for a long time and now at least we have a law to check them. This is akin to saying that we have now decided to legitimize the abuses and put in an accountability mechanism to ensure that no one goes beyond a certain point. If this is not bunkum I don’t know what is.

There is yet another problem. While the arguments in favor of this law are being presented in relation to terrorism, it is equally applicable to Balochistan where some groups have, since 2005-2006, begun a secessionist movement. Hundreds have disappeared, mutilated bodies found and rights groups established to agitate the issue. The retroactive application of this law—which means that actions done in the past are also legally covered by the Act—the shifting of the burden of proof on the accused, and search and detention without warrants are the provisions that make this law extremely open to abuse not just in relation to religious extremism but also for the people of Balochistan. These provisions also go against the grain of accepted legal principles.

In dealing with internal problems, including that of desiring acceptance by groups that want to break away, states have to act strong, not hard. Those who want to secede must be dealt with strongly. But strength is a function of legal action, not creating a legal void as legality.