A Tale of Two Leaders 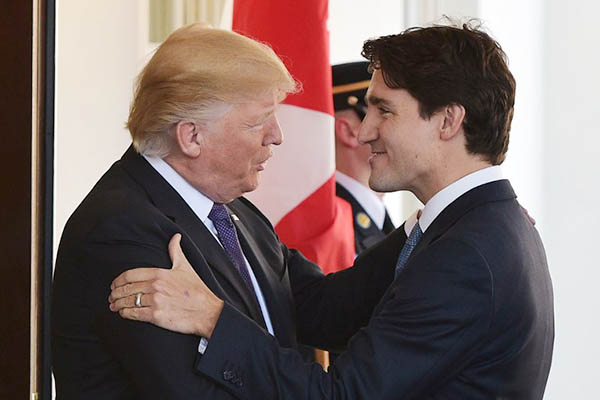 U.S. President Donald Trump and Canada’s Prime Minister Justin Trudeau failed to paper over differences on the treatment of refugees during a joint public appearance on Monday, but appeared to tone down harsh trade rhetoric.

The two leaders avoided directly criticizing each other after a meeting in the White House, but made it clear they did not see eye-to-eye on Trump’s efforts to ban refugees and travelers from seven majority-Muslim nations.

Trump defended his controversial immigration decree as “common sense” and demurred when asked if Canada’s open door policies posed a threat for the United States. “You can never be totally confident,” Trump said when asked about America’s northern border, before vaunting his Department of Homeland Security’s migrant round-ups.

Recent days have seen the arrest of hundreds of undocumented migrants across the United States. “We’re actually taking people that are criminals—very, very hardened criminals in some cases, with a tremendous track record of abuse and problems, and we are getting them out,” Trump said.

Civil rights group say migrants with no criminal record are also being caught in the dragnet. Trudeau said that “Canada has always understood that keeping Canadians safe is one of the fundamental responsibilities of any government.”

“At the same time, we continue to pursue our policies of openness towards refugees without compromising security.”

The gulf between the two neighbors was always going to be difficult span: Trump has painted Syrian refugees as terrorists-in-waiting, while Trudeau has traveled to Toronto’s Pearson International airport to greet them.

After striking up a much-flaunted ‘bromance’ with president Barack Obama, Canada’s youthful liberal leader was in Washington to woo a septuagenarian Republican, with whom he shares little in common. Trudeau is the third foreign leader received by the Republican mogul since he took office on Jan. 20, following meetings with Britain’s Theresa May and Japan’s Shinzo Abe.

Trudeau visit got off to an awkward start, when he arrived at the White House early and his limousine was forced to wait on the driveway for around five minutes before Trump came out. The two men then greeted each other with a handshake and headed into the Oval Office.

While there was little common ground on migration, Trudeau and Trump did appear to narrow the gap on trade. Trump had vowed to put “America first” and rip up the North America Free Trade Agreement, but significantly toned down that rhetoric after meeting Trudeau.

Trump called for trade to be “reciprocal,” but said he wanted to only “tweak” rather than gut the terms of trade. “America is deeply fortunate to have a neighbor like Canada,” Trump said, hailing the opportunity to “build even more bridges” of commerce. “We understand that both of our countries are stronger when we join forces in matters of international commerce,” Trump said.

The economic ties between America and its northern neighbor—who share the world’s longest common border—run deep. Three-quarters of Canada’s exports go to the U.S., and Canada is the top destination for exports for many U.S. states.

Trudeau, a fervent supporter of free trade, emphasized the importance of NAFTA and issued a subtle warning about the risks of protectionism for the U.S. states. “Make no mistake, at the end of the day, Canada and the U.S. will always remain each other’s most essential partner,” Trudeau said. “As we know, 35 U.S. states list Canada as their largest export market, and our economies benefit from the over $2 billion in two-way trade that takes place every single day. Millions of good, middle class jobs on both sides of the border depend on this crucial partnership.”

Trump had not been specific on how he wants NAFTA talks to develop, but has repeatedly trashed the 23-year-old pact, calling it a “catastrophe” for American jobs and threatening to slap tariffs on imports from Mexico.

Trump and Trudeau are a study in contrasts: their path to power, their political stripes, their style—they could not be more different.

Manhattan property mogul Trump won the White House in a shock November election victory over Hillary Clinton after painting a dark picture of a country in turmoil and vowing to put “America first.” Trudeau, the son of a well-liked prime minister, came to power promising to “provide a positive and good government for Canadians” and enhance the country’s image abroad.

Family connections were deployed by both sides on Monday, with Ivanka Trump sitting in on the two leaders’ meeting with female business leaders and Trudeau gifting Trump a photo of his father and the now U.S. president together.