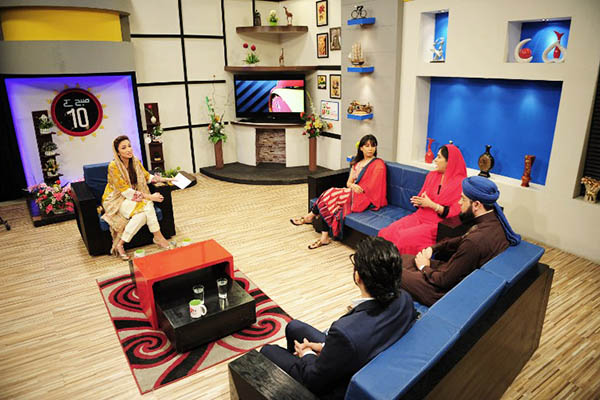 Doctor Nadimuddin Siddiqui fixes his gaze on a camera in the shiny new studios of Health TV in Karachi, and prepares to take the day’s first question.

“My husband doesn’t want to make love anymore, what should I do doctor?” the housewife asks over the phone.

The new TV show, which tries to deal with the delicate subject of sex and embarrassing illnesses without angering conservatives, is unique in Pakistan. Most of the country’s 80-odd television stations fill their airtime with cooking shows, soap operas, cricket and interminable chat shows debating the country’s myriad political dramas. But once a week, for an hour, Health TV takes questions from viewers on sex, specifically sexual problems.

“My husband only wants to do it once a week, sometimes once a fortnight, and it doesn’t last very long,” continues Ayesha the housewife, calling from Lahore.

The portly Siddiqui, his pearly white teeth glistening under the studio lights, doesn’t miss a beat. “We call this loss of libido … it occurs when you have a low level of testosterone. You should work on your husband’s diet, feed him more fish and push him to exercise,” he says. “God willing your husband will get better.”

Each Thursday Clinic Online, which began airing a year ago, takes dozens of calls on subjects ranging from loss of libido and erectile dysfunction to questions about sexually transmitted diseases, micro-penises and nymphomania. “Sex is a very difficult matter in Pakistan, here it is very difficult to talk in open forum, in media, in any seminar. So whenever you talk about sex you should be very careful,” Siddqui said after the show.

He attributes the program’s success in part to highlighting issues around sexual diseases, which he says resonates even with the deeply religious, and takes pride in having avoided controversy—so far. “I have never seen a single person who is having any objection [to] me. They appreciate me because … if it is a disease, you have to treat [it]. You must try to propagate your knowledge,” he said.

Founded three years ago, Health TV is something of an odd fit in Pakistan, a conservative Islamic state of 180 million people that saw an explosion of private broadcasters in the early 2000s following the liberalization agenda of former ruler Pervez Musharraf.

Part of the Ziauddin network of private hospitals, Health TV says its mission is to improve health awareness in a country where access to a doctor can be difficult in rural areas and for those without financial means. Sometimes religious conservatism can play a part in ignorance and poor health: some gynecologists are known to refuse examining unmarried women, who according to them should not be having sex.

“In our society, the woman, if she comes from a very conservative background, someone would have to take her to the doctor—her mother, her sister,” says Faizan Syed, the channel’s director. “This [show] gives them that comfort of a hidden identity.”

Syed stresses that the channel provides only an advisory role and people should still visit a doctor if they are concerned. And the channel also offers advice to men.

“We are living in a conservative society and we hesitate to talk on such issues with our doctors,” said laptop salesman and Health TV viewer Mehboob Ahmed, from Karachi. Other programs deal with topical subjects like polio, the crippling disease still blighting Pakistan thanks in part to Taliban opposition to vaccination.

Even sensitive issues like abortion and breast cancer are covered.

Ashraf hosts a morning show where a cleric, a psychiatrist and a social worker have gathered to discuss abortion—illegal in Pakistan except to save the mother’s life. The opinion of religious leaders carries a lot of weight in Pakistan and can add significantly to a doctor’s arguments. What, for example, does Islam make of abortion?

“If anything like this is done to save the life of a mother, then sharia [Islamic law] allows abortion,” says cleric Shahid Madani. The public appear to agree, if the dozens of calls to each show are anything to go by—though Pakistani channels guard their ratings jealously.

Ok, so the channel must exercise restraint and not the ones threatening it?

You are a utter pile of mess

are you for real mate? one of the few instances of something positive happening in pakistan and you have to be a dick about it. Every one only talks about education in pakistan but when it comes to sex education everyone behaves as if they dont know jack shit. Meray dost ko to 20 saal ke baad yeh lagta that ke uskay papa abhi tak virgin hain. bolta hai papa mummy ke saath aisa kaisay karsaktay hain :DDD:d;