‘A Whole Group of Incompetent People’ 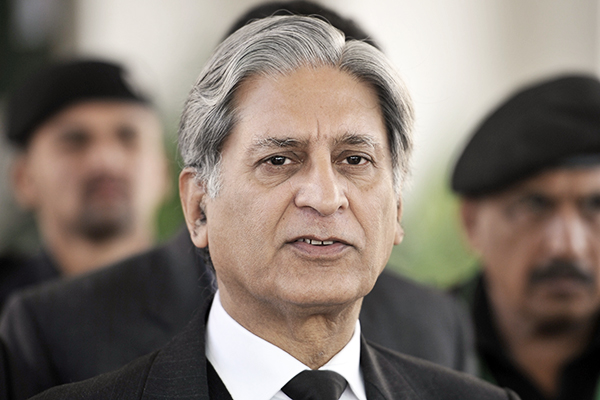 In conversation with Aitzaz Ahsan.

Sen. Aitzaz Ahsan of the Pakistan Peoples Party has been a consistent critic of both the Nawaz Sharif government and the elections that brought it to power. We spoke with him in Lahore recently about the ongoing political crisis, claims of electoral fraud, the waning fortunes of his party in the Punjab, and more. Excerpts:

You have said that last year’s elections were seriously flawed. Does Prime Minister Nawaz Sharif’s government then deserve to complete its term in office?

These are two separate issues. What I have expressly said is that the election in Lahore’s NA-124 constituency, to my knowledge and awareness of the facts, was massively rigged. There were 264 polling stations for NA-124 and so there should have been 264 sealed bags with election material. When we officially inspected these, as many as 152 bags were not sealed or had their seals broken—this is fundamental, basic proof of rigging. Another 80 had other defects, including proven destruction of the record and the absence of counterfoils, without which there is no way of telling how many ballots had actually been issued on Election Day. There are other constituencies, like NA-139 in Kasur and NA-118 in Lahore, that have also yielded evidence of systemic and comprehensive rigging. One can generalize from that, of course, but what would be necessary to hit the entire election would be more such inspections. While there is prima facie proof of rigging, no one has the right to hold a gun to the prime minister’s temple and insist on his resignation. We are against the process adopted by Pakistan Tehreek-e-Insaf’s Imran Khan and Pakistan Awami Tehreek’s Dr. Tahir-ul-Qadri. Until it is found by a competent judicial inquiry that the entire election was rigged and until there’s a no-confidence vote against him in Parliament, Sharif has the right to continue as prime minister.

How much of an embarrassment, if at all, is the ‘Go Nawaz, Go’ campaign to Sharif’s government, and what is your advice to him on handling this?

The ‘Go Nawaz, Go’ campaign is obviously quite embarrassing for the government—and not just for the prime minister but also his ministers and party colleagues. If they were to avoid public exposure for three to four months, it may peter out. But if the government continues misgovernance and corruption, it will become more intense, widespread, feverish, and this slogan may, in fact, demolish his legitimacy.

Emerging differences among the ranks of the ruling party have been widely reported. The water and power minister and the Punjab governor have both, reportedly, expressed displeasure with Chief Minister Shahbaz Sharif. How do you view these developments?

I am personally not aware of any great schism in the Sharif establishment. They are all in the same boat, they are a whole group of incompetent people, but I think they will stick together because they know that they sail or sink together.

How would you compare the crowds at Khan’s rallies to, say, those that came out in support of Bilawal Bhutto Zardari in Karachi on Oct. 18?

Both sets of public meetings were big. Both have been massive to a point where the exact figures of attendance become irrelevant.

The PPP polled poorly in the recent Multan by-election despite Zardari’s visit there. Has the PPP lost ground in the Punjab? And, if so, how does it regain its standing?

We will definitely have to go back to the drawing board and confront the situation in the Punjab, where Sharif and Khan appear to be more strident and effective. It is the interest of the PPP that there are no early elections and that we get a chance to reinvent ourselves. There is immense potential to do that now with a new, young leader who is making the right sounds with respect to the major issues facing Pakistan, including terror and religious intolerance.

Were you surprised that Qadri ended his Islamabad sit-in?

That was no surprise to me. Realistically speaking, that decision should have been taken by him at least four weeks ahead of his announcement. Instead, he continued to rile up expectations of a revolution that never was. He had said that he and Khan should be killed if they left the spot, then he claimed the government would end before Aug. 31, then he took out a funeral shroud and said that he would be buried at the place of his sit-in but not leave without instituting revolution. Finally, he folded up without a whimper. I had predicted from Day One that he would not last and would take a flight out of the country. And that is what he has done.

Do you feel the sit-ins and rallies have impaired the working of the government, and how do you see history judging this antigovernment movement?

The sit-ins and rallies did certainly paralyze the government for a few weeks but Islamabad learned to live with them and go around them. The paralysis of the government continues even after the sit-ins have lost their shine, but the protests and demonstrations led by the PTI and PAT will no doubt have a long-term effect on the politics of Pakistan because of the issues consistently and vociferously raised by them.

Do you see the local-government elections happening, and what impact could these possibly have on the ongoing PTI protests?

I don’t think the ongoing protests will be in place when the local-bodies elections are held. There is some considerable time before these can take place, particularly since the Election Commission has to delimit constituencies under different provincial laws throughout the country.

You spearheaded the lawyers’ movement, twice, for the restoration of Iftikhar Chaudhry. His legacy appears to have been tarnished by all sorts of allegations, including from Khan, who says Chaudhry colluded with Sharif’s party to rig the vote. In hindsight, what is your take on Chaudhry’s time as chief justice?

Backed by a massive popular movement, Chaudhry had a great opportunity to reform the entire judicial system the five years he was in office after his restoration. But, unfortunately, he got locked in personal vendettas and his bias took the better of him. He was partial to the political parties that had supported his reinstatement and feverishly set about opposing those that has resisted his reinstatement. In the process, the quality of justice delivered by the court suffered enormously.

Some ruling-party members have stated that the protests were triggered by the government’s decision to try Pervez Musharraf for treason and that they are, or at least were, being encouraged by some top Army personnel. Do you agree with this?

The impression that the intelligence agencies or Army were behind Qadri and Khan was itself conveyed to the public by Qadri and Khan. How else could Qadri predict with emphasis that the government would be ousted by Aug. 31? On that date, addressing his crowd, Qadri also emphasized that the next incremental step in the protest—and he was referring to the storming of Parliament and P.M. House—could not take place that day because he had neither received a yes or no from GHQ. And Khan strengthened this impression by referring to the “umpire” who was going to raise his finger to obtain the resignation of the prime minister. Despite such clear and public assurances to their supporters, Qadri and Khan were not contradicted by the military’s Inter-Services Public Relations agency on the several occasions that they made explicit references to the “umpire.”

Over the next few weeks and months, how do you see things playing out?

The only thing you can predict in Pakistani politics is the past. However, I do not see the prime minister resigning nor do I see Khan reneging from that demand. So things may continue very much as they are.

Editor’s Note: The earlier version of this piece erroneously cited the total number of bags with electoral records for Lahore’s NA-124 that were either not sealed or had their seals broken as 15. The correct number is 152 bags or about 58 percent of the total. We regret the error.

Aitzaz’s comments sound like the days of the PPP rule were the glory days of yest a year and that the PML-N came in and ruined things.
In reality the PPP goverment was a patent failure.
Every institution/department that they medalled/interfered took a rapid turn for the worse.
From stuffing state institutions like the PIA and Steel Mills, with it’s cronies to the country’s energy policy. Every other month one PPP minister or another (normally the clowns from Punjab) would claim that load shedding would end within a month. Look what happedened
The PPP in Punjab are still the same old faces; the pirs and feudals.
Did your wonderful 18th ammendment or other legislations improve educations standards, health standards, average income?