A Widow to India’s Soul 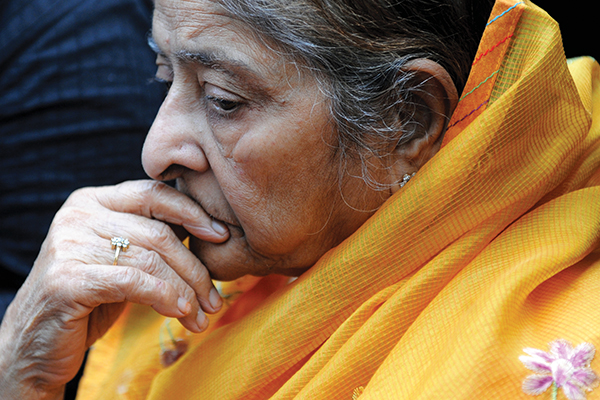 Zakia Jafri reminds India, and the world, about Modi’s inglorious past.

On Feb. 28, 2002, a Hindu mob in India tore mercilessly through Ahmedabad’s Muslim neighborhood of Gulbarg Society. The attack left at least 69 dead; Ehsan Jafri, a former lawmaker of the Congress party, was among them. Jafri, who had been making desperate calls to police and the Gujarat chief minister, Narendra Modi, for help, suffered a particularly gruesome end: his limbs were hacked off, he was beheaded, and his body was set afire. His widow, Zakia, 75, and Citizens for Justice and Peace, a Mumbai-based NGO, want Modi and 62 others convicted for their role in the massacre. We spoke with her recently over email about Modi and more. Excerpts:

The Supreme Court appointed a special investigation team to look into your husband’s murder. This team gave Gujarat’s Chief Minister Narendra Modi a clean chit. Do you have findings that point to the contrary?

The voluminous record provided to us includes documents from the State Intelligence Bureau and the Police Control Room. This was analyzed by the team at Citizens for Justice and Peace and placed before the courts. The record shows connivance at the highest level—establishing crimes of commission, not omission. We have proof that the fire brigade did not answer distress calls and that the bodies of the Godhra victims were deliberately brought to Gulbarg Society to ignite passions. Gulbarg is located within three kilometers of the police commissioner’s office and two other major police stations, in Shahibaug and Meghani Nagar. How could the police take 10 hours to reach Gulbarg when it was only three kilometers away? Who prevented the police from acting against the rioters? Who was behind police inaction when innocent Muslim children, boys, young girls, and elders were brutally raped, killed and then burnt?

Why was Modi let off by the special investigation team?

They did not conduct an impartial inquiry and the investigation was compromised. The Supreme Court’s amicus curiae, Raju Ramachandran, said there is material to prosecute Modi. So now you have two divergent opinions.

Despite the apparent odds, you’re persevering with your quest for justice.

In a country like India, all odds are against the citizens. But we have pointed out hundreds of flaws in the inquiry-closure report submitted by the special investigation team. We have presented very strong documents and evidence which point to the direct involvement of Chief Minister Modi in the riots. We are sure that when the higher courts scrutinize our petition it will be accepted, the closure report will be rejected, and charges will be initiated.

Do you have faith in the courts?

Yes, without the slightest doubt. My husband was a lawyer and trade unionist by profession. He believed in the rule of law and would’ve done the same.

Have you received any Congress party support?

No. Ours is a battle supported by citizens of conscience, not the Congress party. My husband belonged to Congress, yes. He won the Lok Sabha election from Ahmedabad. He participated in the Rajkot election campaign on behalf of Congress just a few weeks before his martyrdom. The victims are fighting the legal battle in various local courts and at the Supreme Court. Had it been a Rashtriya Swayamsevak Sangh-backed government at the center, it would have done everything to obstruct our case and make all efforts to unnecessarily stretch matters. A fair government at the center has ensured that the Gujarat cases are taken up by the courts as per due process and the Indian Penal Code.

Has there been any pressure from Modi’s Bharatiya Janata Party on you to withdraw your case?

Is it accurate to describe the Gujarat riots as “state-sponsored genocide”?

Yes. Modi had taken out a procession covering all the districts of Gujarat and it was called Gaurav Yatra (“Pride Procession”) to celebrate the burning, looting, raping, and killing of innocent Muslim women, elders, girls and boys. He continued to demonize Muslims by orchestrating fake killings. His speech on Sept. 9, 2002, should have ensured his prosecution, but unfortunately still hasn’t.

Do you worry about India under Prime Minister Modi?

It will be a big setback for Indians if such a person becomes prime minister. Muslims will have to be very watchful and alert. We saw what happened during Prime Minister Vajpayee’s time in 2002. The institutionalized bias that has crept in is because of men and women with an anti-constitutional mindset being placed in positions of power by the BJP. We’ve seen the Samjhota Express blast, the Mecca mosque blast, the Ajmer Dargah blast, the Malegoan blast. Today we know all of these were planned and done by the RSS or its affiliates. Thousands of innocent Muslims were caught and put in jails for years. Such things will only rise if Modi becomes P.M. India is a multicultural society. It was a tremendous task for Prime Minister Pandit Jawaharlal Nehru to bring India together on a common platform and lead it to become a scientific and rational society. Modi does not even remotely have the qualities necessary to keep India together and move it toward scientific progress.

‘It will be a big setback for Indians if [Modi] becomes prime minister. Muslims will have to be very watchful and alert.’

How well do you still remember that day in Gulbarg?

I not only remember it but I live the loss and tragedy every day. When the mob attacked us, a lot of people from the society ran into our home in the belief that my husband would be able to protect them. I was sent up to the second floor, but I could hear everything. Women were screaming as they were raped. After they had killed Ehsan, at around 5 p.m. a police van rescued us. I spent the whole night at the Shahibaug police station. I was shattered. I saw that dozens of policemen weren’t even on duty that day. It haunts me and I can’t stop thinking about it—always questioning why it happened, why we couldn’t save them.

You’ve endured a long journey that is far from over. What has sustained you?

I have taken it upon myself as a duty to deliver justice for those who are less fortunate than I to continue this battle. I am proud for the support which we victims continue to receive from peace-loving individuals all across India, especially the Citizens for Justice and Peace. For me, it is fighting the battle against Goliath. All efforts have been made by the state government [in Gujarat] to delay and stretch the proceedings on frivolous grounds. But when I look back and remember those who were martyred in my house, those who came to my husband for protection and to take shelter, I forget the delays and the pain and continue to march in our battle for justice, peace, and rehabilitation along with all those who suffered.

India is by constitution a very secular country. I hope and pray that it will become even more secular and fair as Indians march toward the path of scientific progress and equality. Yes, there have been desperate attempts by a few political organizations to diffuse the secular character of India and its Constitution. I am confident that the people of India will see through the vicious desires of such organizations that were responsible for demolishing Babri Mosque and will surely vote against them.

Saw her daughter speak in london… very sad story,.. have to bring criminals to book and not the parliament…

I am completely aghast at what this brave woman has suffered through, and ashamed at my ignorance for having known nothing about it before this article. Thank you, Rimmel, for bringing this story to light. One more reason to dread Modi’s India.

To put it quite simply – Who cares ?

HUndreds of wives have lost their husbands to communal violence in India including many Hindus. Hundreds of Hindu families have suffered losses to Islamic terrorists for decades but no whining and moaning from the press about them.

Hundreds of thousands of Hindus in Bangladesh and Pakistan have been massacred in brutal political, religious riots, terrorism, kidnappings and forced conversion. But no whining about them.

59 Hindu women and children were burnt alive in Godhra just before the Gujarat riots by Islamic mob but no mention about them ? To hell with Zaki Jafri and her tantrums – she is NOT special and her loss is NOT unique.

What Zaki Jafri went through was wrong and what Hindus went through was also wrong. The pain of losing someone close to you is not unique. We should empathize with all those who suffered unnecessarily because of religious bigotry.

If it’s true what you are saying, then pakistan should have stopped exporting terrorism to India and other parts of world. But unfortunately pakistan didn’t. Kasab is a perfect example of this. The writer should come to India and also take interviews of those people whose people were killed in pakistan sponsored terrorism.India has continuously produced Budha like personalities & has accepted them as GOD incarnates .Unlike pakistan, who produced terrorists like JUD, TTP, list is endless. Even one of the Hindu texts declare Allah as one of the GOD incarnates .

Mazo, what you’re saying is that we should turn our back to any kind of merciless violence because it happens everywhere? Anyone fighting for justice is moaning? Apathy to violence in the name of progress will doom someone else today and possibly you tomorrow.

Why is she not talking about Godhra train and also, Modi’s record to not let riots happen in Gujarat since 2002, when UP and Assam saw many riots in this period?
Of course, her personal loss is a big loss and riots should definitely be condemed, but I feel she is also biased against Modi. Modi did not do any worse than Rajiv Gandhi in that turbulent period. Saying he didn’t act or he did not try to manage riots is not true. Saying he failed to completely stop the riots is true and the right depiction. But that speaks a lot bout failure of administration and wrong passions in those times and less about his intention to just kill each and every muslim.

Since this is a Pakistani forum and you guys want to free ride on sentiments during Indian elections… just try to imagine first what will happen if Hindus burn a train cabin full of Muslims in Pakistan.

The man is rigid and not expected to improve.