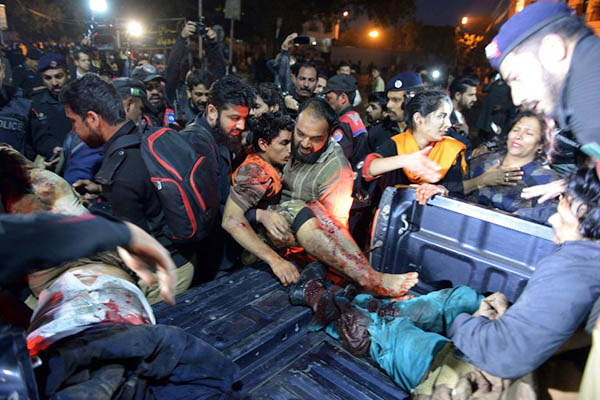 The PCB should not try to stage the PSL 2017 final in Lahore after last night’s bombing.

On Feb. 13, a teen-aged suicide-bomber targeted a protest of hundreds of people connected with the pharmaceutical industry at Charing Cross in the heart of Lahore, killing 15 people, including two senior police officers, with over 80 others seriously injured. It took minutes for the media to attempt a connection between the bombing and the final of the Pakistan Super League cricket contest to be played in Lahore on March 7. Terrorist organization Jamaat-ul-Ahrar owned the massacre, claiming they were targeting police personnel.

Lahore was the target in March 2009 when 12 terrorists attacked the visiting Sri Lankan cricket team, injuring six players and killing six policemen and two civilians—all watched by the world on TV. After 2009, no major player has agreed to come to Pakistan to play cricket, impacting the quality of the game in Pakistan. The PSL tournament, featuring four foreign players in each of the five participating teams, was meant to open up Pakistan once again to international cricket by staging its final in Lahore.

Two days before the Lahore bombing, two Pakistani players in the PSL were found involved in spot-fixing and were sent home. The media hastily connected the gambling cricketers to neighboring India without naming it, and called it a conspiracy by “enemies of Pakistan.” Monday’s massacre was even easier to connect with India because Jamaat-ul-Ahrar is based in Afghanistan and is thus “eating out of the hands of Indians.”

No doubt, incidence of terror has abated in Pakistan but the news from Pakistan is still far from good. Last year saw 144 killed through acts of terror. Now Pakistan Cricket Board wrongly vows to hold the PSL final in Lahore “even if the foreign players don’t come”. There is no doubt that they will not come after the Monday blast, but it will still be better to avoid an anti-climax and stage the final in the U.A.E. and let the competition be as exciting as it has been so far.