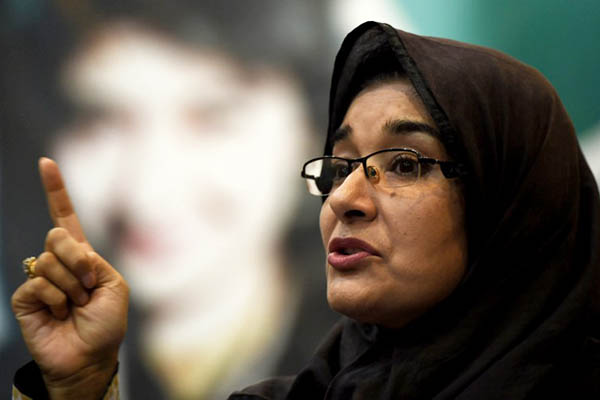 The Pakistani scientist remains one of the ‘most wanted’ on militant groups’ lists of prisoners to be exchanged for hostages.

From Algeria to Iraq to Yemen, one name crops up again and again in the demands of Islamist hostage-takers: Aafia Siddiqui, the Pakistani scientist jailed in the United States for attacking American soldiers in Afghanistan.

Militant groups from Al Qaeda and its offshoots to the Islamic State (IS) have sought the 42-year-old’s release in exchange for captives, most recently the U.S. journalist James Foley, beheaded by I.S. in August.

Siddiqui’s story, one of the most intriguing of the “war on terror” era, began in March 2003 when Al Qaeda number three and alleged main 9/11 architect Khalid Sheikh Mohammed was arrested in Karachi. Mohammed, or “KSM,” was handed to the Americans and transferred to Guantanamo Bay, where he was repeatedly water-boarded and “rectally rehydrated” as part of interrogations, according to a Senate report on CIA torture.

Soon after his arrest, Siddiqui—suspected of Al Qaeda links by the U.S.—disappeared along with her three children in Karachi. The few U.S. media reports about the incident described her as the first woman to be suspected of links to Osama bin Laden’s terror network—earning her the moniker “Lady Al Qaeda.”

Five years later she turned up in Afghanistan, where local forces arrested her in Ghazni province.

According to U.S. court papers, she was carrying two kilograms of sodium cyanide hidden in moisturizer bottles, along with plans for chemical weapons and New York’s Brooklyn Bridge and Empire State Building. The Afghans handed her to U.S. forces who began questioning her. During her interrogation she grabbed a rifle and opened fire, according to witnesses, at U.S. agents while screaming “Death to America” and “I want to kill Americans.” The soldiers escaped unhurt, but she was injured.

From Afghanistan, Siddiqui was put on trial in the U.S. and sentenced in 2010 to 86 years for attempted murder—and not for any Al Qaeda links.

Much about the case remains unclear, including where Siddiqui was between her disappearance in 2003 and reappearance in 2008. Even the U.S. trial judge Richard Berman acknowledged in his verdict that it had “never definitely been established why Dr. Siddiqui and her son were in Afghanistan.”

Her supporters claim she was the victim of a secret Pakistan-U.S. plot. In an interview with AFP in Karachi, Siddiqui’s family protested her innocence and despaired at the horrors associated with her name. According to the family, Siddiqui and her three children—Ahmed, Mariam and little Suleiman, then six months old and today dead—were about to leave their house in the posh Gulshan-e-Iqbal district of Karachi for the airport when they were apprehended by Pakistani and U.S. agents.

“When Aafia left, couple of hours or so later, there was a knock at the door. My mom walked to the gate and asked ‘who is it?’” said Fowzia Siddiqui, Aafia’s sister. “He … said something like: ‘If you say anything or report this to the police, you will have four dead bodies’.”

At her trial in New York in 2010, which also marked her only public appearance since 2003, Siddiqui said she was detained for a “long time” in a “secret prison” in Afghanistan. Her supporters said she was the “ghost prisoner” in Bagram, serial number 650, but the U.S denies this.

There was little in Siddiqui’s upbringing in an elite family to suggest her life would pan out as it has. After a childhood split between Pakistan and Zambia, the 18-year-old Siddiqui traveled to Texas, where her brother lived, before studying at Boston’s prestigious MIT and doing a PhD in neuroscience at Brandeis University. In the 1990s, her family arranged a marriage for her with Amjad Khan, a Karachi doctor who joined her in the U.S. Between her studies, she devoted herself to charities and distributing copies of the Quran at her university.

From 2001, the couple appeared on the FBI radar for donations to Islamic organizations and a purchase in the husband’s name of $10,000 worth of night-vision goggles, books on warfare and other equipment. The following year they returned to Pakistan and Aafia asked for a divorce. American officials suspect she has remarried Ammar Al-Baluchi, KSM’s nephew, though her family denies this.

Some U.S. officials believe Siddiqui was with Al Qaeda since her time in America and spent 2003-2008 in Afghanistan with the family of Baluchi, who was arrested in 2003 and interned in Guantanamo.

Her family denies this, while General Pervez Musharraf, Pakistan’s military ruler at the time, said he would not have handed a Pakistani over to the US. “Our views were clear: no Pakistani will ever be handed over to anyone—that was our policy and we followed it very strictly,” Musharraf says.

As the “war on terror” winds its way through its second decade, Siddiqui risks going from “Lady Al Qaeda” to “Lady Islamic State,” after the Foley episode. “If the U.S. isn’t doing anything about it, if the Pakistanis don’t do anything about it, people like Daesh [the Islamic State] will exploit” the case, her sister says. “If Aafia knew about this the way her name is being used, she would be devastated.”