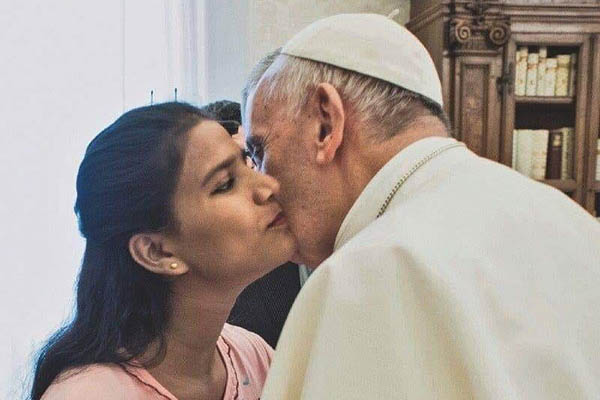 A photo that claims to show Aasia Bibi, a Pakistani Christian woman who was acquitted of blasphemy, kissing Pope Francis is circulating on Whatsapp groups and social media sites.

The posts are false, as they misleadingly use a photograph of Bibi’s daughter meeting the pontiff in February this year.

The misleading image began circulating shortly after Bibi, who spent eight years on death row, was freed from jail on Nov. 8. Her release came after Pakistan’s Supreme Court on Oct. 31 overturned Bibi’s conviction.

Blasphemy is an incendiary charge in Muslim-majority Pakistan, where even unproven allegations of insulting Islam and its Prophet can lead to lynchings by vigilantes. The image that has been circulating since her release shows a woman with brown hair kissing the Pope.

Similar misleading posts with the image have also circulated on Whatsapp groups and been posted to Twitter.

The misleading photo is not of Bibi. It is from a meeting of her daughter and husband meeting the Pope at the Vatican in February this year. A photograph of the February meeting was released by the Vatican that shows the same scene as that in the misleading posts.

In both the photograph carried in an article (https://www.vaticannews.va/en/church/news/2018-04/pakistan-asia-bibi-fasting-prayer-justice.html) by the Vatican News and the misleading posts, Bibi’s daughter is wearing the same clothes and is in the same room.

The misleading post is the latest in a series of pieces of disinformation about the Bibi case that appear to be aimed at raising tensions further. “It has become a norm to publish fake news for sake of headlines, #AsiaBibi case is sensitive issue,” Pakistani Information Minister Fawad Chaudhary said in a tweet last week.