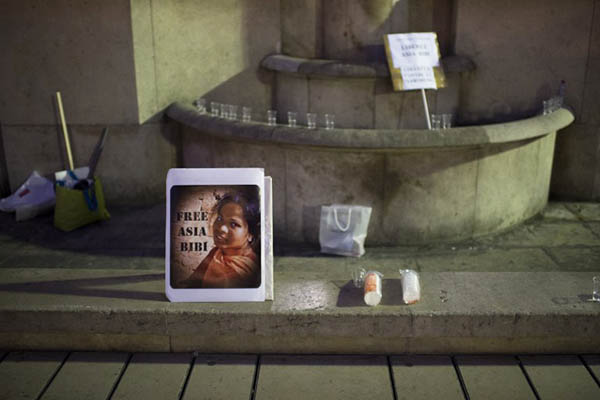 Aasia Bibi has been put in isolation over fears she could be targeted by vigilantes enraged over a high-profile ruling in another blasphemy case that moderates said struck a blow against religious extremism. Prison officials and rights activists said this week that they were concerned for Aasia Bibi’s life due to the security threat and her worsening health.

The mother-of-five, whose plight has prompted prayers from the Vatican, has been on death row since she was convicted in 2010 of committing blasphemy during an argument with a Muslim woman over a bowl of water. She was put in solitary confinement last week at the women’s prison in Multan, an official there told AFP.

The move came after “genuine” threats to her life were issued in the wake of a Supreme Court ruling that upheld the death sentence for Mumtaz Qadri, the killer of Salmaan Taseer who sought blasphemy law reform after Bibi was sentenced to death.

Blasphemy is a hugely sensitive issue in Pakistan. The country has never executed anyone on the charge—but anyone convicted, or even just accused, of insulting Islam risks a violent and bloody death at the hands of vigilantes.

Last year a British-Pakistani citizen who had been sentenced to death for blasphemy was shot and wounded by a guard at Rawalpindi’s Adiala jail. And a Christian laborer and his wife were burned alive last November after being accused of throwing pages of the Quran in the garbage.

“She [Bibi] could be killed by any inmate or even a prison guard, so we have to be careful,” a prison official told AFP. A second official confirmed that Bibi had been isolated, adding: “We are concerned for her life.”

The second official, who spoke to AFP on condition of anonymity, also said Bibi’s health had deteriorated. “She was vomiting blood last month and was having difficulty walking,” the official added.

Rights activists and family sources also voiced concerns for Bibi’s health. “Her life is in danger because of her health and the filthy prison conditions, and from fundamentalist elements within the prison,” said Shamaun Alfred Gill, a Christian activist and spokesman for the All Pakistan Minorities Alliance (APMA). He said the group had repeatedly requested Bibi be transferred to a hospital, but the requests had been rejected. “Aasia has a history of asthma and we were told that her health condition had worsened at one time but she was recovering now,” said a source close to the prisoner’s family.

Bibi denies the charges against her. The Supreme Court agreed in July to hear an appeal against her sentence, but no date has yet been set.

In April, Pope Francis met with her husband and daughter and said he was praying for her. In 2010, his predecessor Benedict XVI publicly called for Bibi’s release. Bibi’s husband has also written to President Mamnoon Hussain to ask for her to be pardoned and allowed to move to France.

Caught in an unending cycle of hatred that alleges, accuses, convicts and kills without proof or even murders after legal recourse is the case of Aasia Bibi a Christian mother of five, on death row since November 2009 on an alleged blasphemy charge in Pakistan.

Pakistan’s blasphemy law stipulate, any person can be charged for blasphemy on the basis of mere hearsay. Aasia Bibi it is alleged made a blasphemous comment during a spat with some Muslim women – this she vehemently denies to this day.

Later, Salman Taseer the governor of Punjab [was shot dead for being a blasphemer by Mumtaz Qadri a police guard], and federal minister for minority affairs Shahbaz Bhatti were gunned down in January and March of 2011 respectively, for acting to defend Aasia Bibi. Both were vocal about Pakistan’s blasphemy law, calling it flawed and urging reforms.

The learned, Justice Asif Saeed Khosa, heading a three-member bench of the Supreme Court of Pakistan, observed, while upholding, Mumtaz Qadri’s death sentence [for the murder of governor Punjab, Taseer], “I have dealt with a case where a person had a property dispute but he lodged a case of blasphemy against his opponent – people can abuse the blasphemy law, and calling for reform of laws is not blasphemy. Justice Asif Saeed Khosa, amply pointing, that Pakistan’s blasphemy law is indeed flawed and imperils the lives of every citizen in Pakistan, irrespective of caste, creed or religion.

“Pakistan isolates Aasia Bibi after security fears” the Pakistan press reported, soon after Mumtaz Qadri’s death sentence was upheld. Adiala Jail authorities confirmed, Aasia Bibi 49, a Christian mother of five on death row since 2009, at any moment can be murdered by any inmate or jail staff and she had been isolated from all other inmates. Earlier, a UK citizen of Pakistani origin on death row for blasphemy was shot and wounded by a Punjab prison guard, in Adiala jail.

Adiala Jail, staff confirmed, Aasia’s health is fast deteriorating and “She is vomiting blood and was having difficulty walking.”

Pakistan’s blasphemy law is one of the most controversial issue, facing the country today – after thousands of religious zealots across Pakistan have vowed they would kill Aasia if she were ever released.

Her husband and four daughters too, live in hiding and have received numerous death threats – the mercy plea for Aasia Bibi to the president of Pakistan has also fell on deaf ears. Furthermore, the Supreme Court Registry announced, “She [Aasia Bibi] will have to wait for at least another four years – even if granted an out of turn hearing by the court”.

Until then, Aasia Bibi 49, will have to languish in Adiala prison, under the constant threat of a murderous attack at any moment.

Aakar Patel in ‘Pakistan’s blasphemy law’ in the Express Tribune mentioned, only seven cases of blasphemy were lodged in undivided India between 1927-1986, but after the introduction of article 295-A, 295-B and 295-C in 1986, a considerable increase was seen in blasphemy cases, especially in the Punjab – and mostly against Christians to settle personal scores, usurp property or simply to browbeat minority Christians into life as third rate citizens by abuse of Pakistan’s blasphemy Law.

Fanaticism and bigotry: According to the National Commission for Justice and Peace, in the last 25 years 1,058 cases of blasphemy were registered in Pakistan against 456 Ahmadis, 449 Muslims, 132 Christians and 21 Hindus, Aakar Patel attributed to a lack of tolerance amongst the population towards the others faith. Aakar Patel, added, “A very strong religious sentiment is believed to be the reason” why? Pakistan has not dared to reform the blasphemy law enacted during the Zia regime, to please fanatic elements to fight as mujahideen in the Afghan War.

For Aasia Bibi, what comes first, the next court hearing or murder on death row?.

This religious intolerance is destroying Pakistan from within.
someone must have the courage to change the text books to teach religious harmany. Pak studies, should be replaced with a true history.