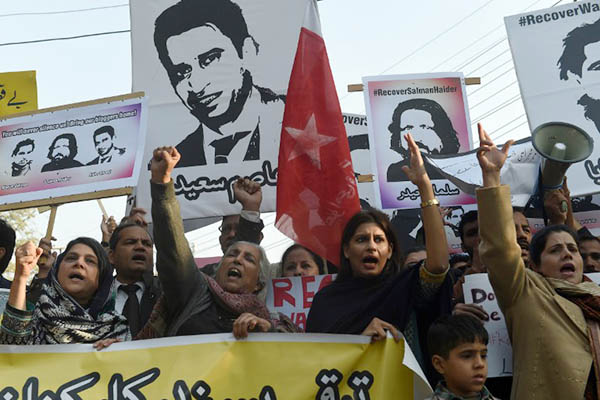 Elements of the ‘deep state’ could threaten the very existence of Pakistan.

Addressing the gathering, nuclear physicist Pervez Hoodbhoy said no terrorist organization had claimed the disappearances and asked the “deep state” to stop hounding those who dare stand against the terror of the ideologically violent. Writing in Dawn on Jan. 14, Hoodbhoy explained: “These near-simultaneous abductions required complex operations, suggesting involvement of some secret state agency…and, as the phone calls made to the families showed, the abductors were dismissive of their identities being traced.”

Pakistan Peoples Party Senator Farhatullah Babar told BBC Urdu the abductions had aroused great concern and that the Senate had actually passed a bill against the state agencies’ involvement in such crimes. Afrasiab Khattak of the Awami National Party clearly identified the “deep state” as the culprit in the kidnappings. Baloch activists added their voice to the condemnations on social media by reminding their Punjabi friends that this policy of “disappearances” had already played havoc with the lives of the Baloch people and not even a Supreme Court ruling had yielded any effect.

More dangerously, it is possible that within the deep state there are elements that have gone over to the Al Qaeda-Islamic State combine, threatening the very existence of Pakistan in the name of “purer” but sectarian Islam. This is not without precedent. Major-General Zaheerul Islam Abbasi, an ex-ISI officer, attempted a coup in 1995. Similarly, Major Haroon Ashiq killed Major General Feisal Alavi on behalf of Al Qaeda in 2008—and after a few years in jail was subsequently acquitted of all charges due to lack of evidence.