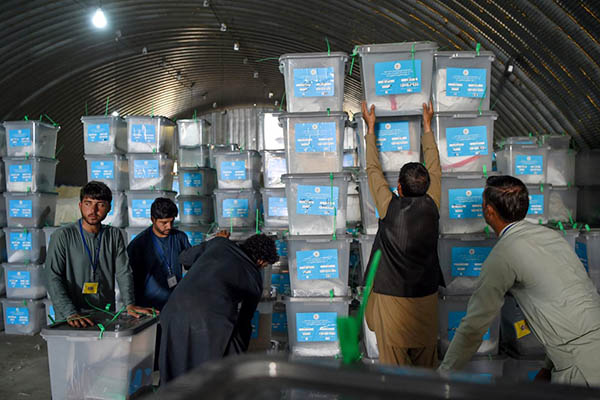 The claims by Asadullah Saadati, who is running beside Afghanistan’s Chief Executive Abdullah Abdullah, come as the country is in the midst of an uneasy waiting period after the Sept. 28 election.

Election officials have called on candidates to show restraint and wait for the announcement of preliminary results in a bid to avoid a repeat of the disastrous election of 2014 which was marred by dueling claims of victory and fraud by Abdullah and his top rival Ashraf Ghani, who went on to win the presidency.

“Circles within the election commission and the palace are jointly organizing systematic fraud,” Saadati told a news conference, without citing any evidence. “The result sheets that are being counted are fraudulent and their entries must stop.”

Voting this year is supposed to be more secure than ever, with each voter verified through biometric machines to ensure no one can cast multiple ballots. Saadati claimed the Independent Election Commission (IEC) was counting “fraudulent” and non-biometric votes.

The IEC has repeatedly said it would only count ballots verified biometrically.

Highlighting the challenges it faces, the commission on Saturday said unidentified hackers had unsuccessfully attempted to break into its computer servers.

On Sept. 30, just two days after the election and before all votes had even arrived in Kabul for counting, Abdullah claimed victory in a move that international and local observers panned as premature. Preliminary results are not due until Oct. 19 but officials have already said that date will likely be pushed back by a few days.

The IEC has said about 2.7 million of Afghanistan’s 9.6 million registered voters cast a ballot—a record low turnout amid fears of fraud, and threats of deadly Taliban violence. However not all of those votes have been verified.

After a recent visit to the IEC, Canada’s ambassador to Afghanistan Dave Metcalfe said he was “impressed” by the commission’s attempts to fight voter fraud. “The checks and balances implemented by the IEC represent a new standard for Afghan elections,” he said in a statement.