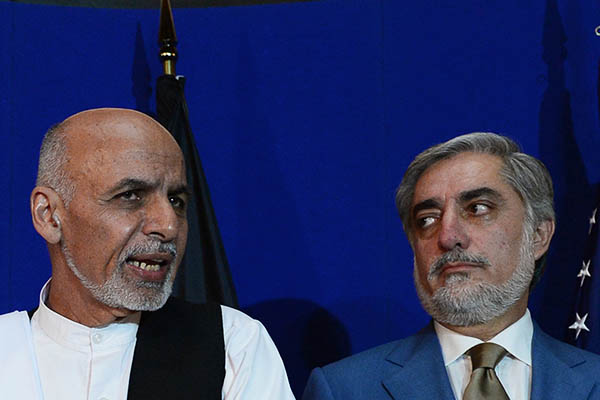 Presidential candidate claims his demands for removal of fraudulent votes have not been accepted.

Afghan presidential candidate Abdullah Abdullah threatened on Tuesday to withdraw from the disputed election, a move that could wreck U.N. efforts to rescue the country’s first democratic transfer of power.

The June 14 vote has triggered a standoff between Abdullah and his poll rival Ashraf Ghani, with both candidates claiming victory amid allegations of massive fraud. To end the impasse, a deal was brokered for an audit of all eight million votes to remove fraudulent ballots, and for the formation of a national unity government under whoever becomes the next president.

But with the audit entering its final stages, Abdullah’s campaign team ignored pleas from the United Nations and the United States to allow the process to be completed and then to respect the outcome. “If they accept our demands by tomorrow morning we will continue the process. If not, we will withdraw from the process and consider it finished,” Fazel Ahmad Manawi, a senior member of Abdullah’s campaign team, told reporters. “Such a process is not acceptable for us and has no value.” He said Abdullah’s demands over how fraudulent votes should be thrown out had been ignored.

Abdullah won the eight-candidate first-round election in April, but preliminary results in the June run-off vote showed he had fallen well behind Ghani. On Monday the crucial invalidation stage of the audit finally began, but Manawi dismissed it as “a joke.”

“The sites we had asked to be invalidated were not considered,” he said. “We boycotted the audit once or twice before and they asked us to come back, but they have never listened to our demands. The audit has confirmed that there has been widespread fraud in the election.”

Abdullah’s withdrawal would seriously undermine the legitimacy of the next government, which must impose security without the assistance of NATO combat troops and save the crumbling economy.

The country has been in paralysis for months due to the election to choose the successor to President Hamid Karzai, who will step down as U.S.-led forces end their 13-year war against Taliban insurgents.

On Monday 3,644 of the 23,000 ballot boxes were put through the invalidation process. Only 74 boxes were thrown out, with 697 selected for a further recount. “It is still premature to draw conclusions about the final audit result based on these initial findings,” U.N. mission chief Jan Kubis said in a statement late Monday. “All parties should continue to respect the process so as to not create unrealistic expectations.”

Tahir Zaheer, a spokesman for Ghani, dismissed Abdullah’s threats as “irrelevant and irresponsible.”

“All the procedures were decided in coordination with both teams and the U.N.,” Zaheer said. “Once the criteria are set they cannot be changed.”

Karzai has insisted the delayed inauguration ceremony must be held on Sept. 2, imposing a deadline that has raised tensions between supporters of the opposing candidates. A smooth transition of power was meant to be the democratic keystone of the multi-billion dollar military and civilian aid effort in Afghanistan, but the crisis has emboldened the Taliban and weakened the economy.

The U.N. has voiced fears of a return to the ethnic divisions of the 1990s civil war if the election dispute sets off a spiral of instability. Any backlash against the final result could split the country, since many of Ghani’s supporters are Pashtuns in the south and east, while Abdullah’s loyalists are Tajiks and other northern groups. Unrest has worsened nationwide in recent months, with major Taliban offensives in the southern province of Kandahar and in Logar province, south of the capital.