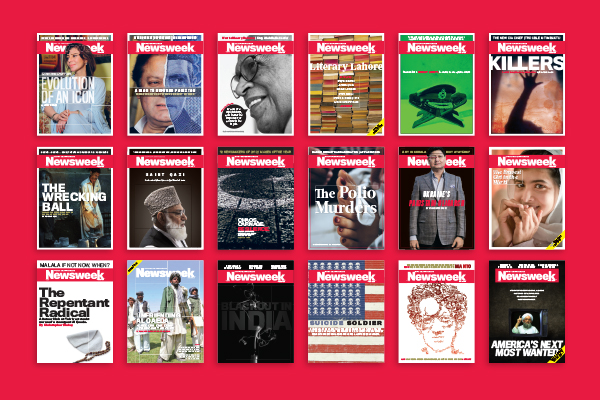 Newsweek Pakistan, the country’s No. 1 newsmagazine.

Newsweek Pakistan debuted on newsstands nationwide in August 2010 and featured the cover essay “The World’s Bravest Nation.” Produced by AG Publications under license from Newsweek LLC, Newsweek Pakistan provides sensible, reliable, and authoritative news and information to its readers on a weekly basis in print and daily basis online.

The newsmagazine is edited by Fasih Ahmed, who has written for The Wall Street Journal and was the inaugural Daniel Pearl fellow. He also won a 2008 New York Press Club award for Newsweek International’s coverage of Benazir Bhutto’s assassination.

Khaled Ahmed is the newsmagazine’s consulting editor, and Jahanzeb Aslam is the managing editor. Newsweek Pakistan’s advisory board comprises Qazi Shaukat Fareed, who has worked with the U.N. for over 20 years; Parvez Hassan, lawyer and environmentalist; Ayesha Jalal, professor of history at Tufts University; Hameed Haroon, publisher of Dawn; and David Walters, former governor of Oklahoma.

Newsweek Pakistan has been widely praised for its editorial excellence.

Its coverage of Pakistan’s polio vaccination campaign won the gold medal at the 2013 U.N. Correspondents Association awards. The cover story was authored by Benazir Shah, Sami Yousafzai, and Shehrbano Taseer.

Here’s what some of our readers had to say in 2011, on our first anniversary:

Asif Ali Zardari, then-President of Pakistan
Newsweek Pakistan has demonstrated a commitment to establishing itself as a credible and authoritative source of news and views. I am confident that it will continue to make strides in quest of excellence and leave its mark in the competitive world of print media. The media profession demands from its practitioners constant vigilance and introspection and a conscious effort to meet the requirements of fairness, objectivity, and balance. Newsweek Pakistan has demonstrated a remarkable keenness to uphold high ethical standards of journalism. I wish it greater glory.

Nawaz Sharif, current Prime Minister of Pakistan
Newsweek Pakistan completing one year of publication in Pakistan is a heartening and unique milestone. The launching of an international news journal from Pakistan is a welcome step and will help local media learn from it. It also shows that Pakistani journalists enjoy the trust of their global colleagues. After 9/11, Pakistan has gained added importance. In this context, there is a need to sensitize the world about the intricate realities of a country worst hit by the war on terror. I hope Newsweek Pakistan continues with its objective, compelling, and incisive coverage.

Pervez Musharraf, former President of Pakistan
I have always had a firm belief in a vigorous, free media for Pakistan. Congratulations, therefore, to Newsweek Pakistan for completing one year of very successful news coverage. The magazine has served the cause of Pakistan very well through its fair, apolitical and unbiased projection of views. The tumultuous period that Pakistan is going through demands bold articulation of critical issues, and the exposing especially of terrorism and religious extremism in our society. I believe Newsweek Pakistan is bound to do well because there is never a boring or dull moment in our region. I wish it all success.

Imran Khan, Chairman, Pakistan Tehreek-e-Insaf
My best wishes to Newsweek Pakistan’s team on the magazine’s first anniversary. They have created a niche for themselves in the country in a short span of time, and have done a good job in putting across the Pakistani perspective along with the international one. This is a positive step toward building a better understanding of Pakistan and promoting peace, human rights, and equitable international relations. I wish Newsweek Pakistan further success and am confident they will continue being objective and honest in their reporting.

Fareed Zakaria, former editor, Newsweek International
I’m delighted that one of the major projects that I was able to launch at Newsweek was the collaboration with AG Publications, Newsweek Pakistan. Its editor is an extraordinary person, full of intelligence and energy, and will play a very important role in Pakistan for decades. I’m glad I was able to be of some help in that career path.

Al Gore, Nobel Peace Prize laureate and former U.S. Vice President
Over the past year, the need for a new, reliable, authoritative news and information magazine like Newsweek Pakistan could not have become clearer. Covering a series of extraordinary events, from the historic floods and the discovery of Osama bin Laden to the debt crisis and war in Afghanistan, Newsweek Pakistan has grown to become the largest circulation newsmagazine in the country. It’s difficult to imagine what the next year will bring, but I’m confident that Newsweek Pakistan will be there.

Founded by Thomas J. C. Martyn, the first issue of “News-Week” was published on Feb. 17, 1933. The newsmagazine became part of The Washington Post Company in 1961. In September 2010, it was being published by Harman Newsweek LLC. That November, the company announced its merger with IAC’s The Daily Beast. In the U.S., Newsweek became an all-digital publication in January 2013. Today, Newsweek is run by Newsweek LLC.

For 80 years, Newsweek has been the globally-trusted publication for information and insights that expand your understanding of a fast-moving world eluding easy explanation. Subscribe!