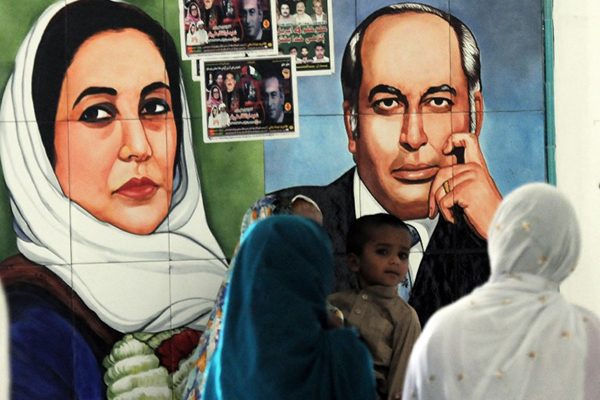 Even in Bhutto central, the Taliban-threatened Pakistan Peoples Party seems to have left many disillusioned.

For the first time in his life, Gulzar Ali Khawaja, the once ardent supporter of the Pakistan Peoples Party—which led the coalition federal government for five years until this March—says he won’t be voting in the May 11 elections and doesn’t mince his words about why.

Furious, with his face red under the hot sun, he cannot believe that no major party leader addressed the crowds on one of the most sacrosanct dates—the anniversary of the April 4, 1979, hanging of PPP founder, Zulfikar Ali Bhutto.

“I come here all the way to pray on the anniversary and they can’t come?” says the 45-year-old property dealer, who drove nine hours from Karachi to the Bhutto ancestral seat in Garhi Khuda Bukhsh. “President Asif Ali Zardari has spoiled the party.”

The PPP announced it would kick-start its reelection campaign after five years in office with a large rally on April 4, but then cancelled it. Bhutto’s son-in-law Zardari and his son, Bilawal, addressed a small gathering, closed to all but state media, in the middle of the night.

Bilawal, the PPP’s star attraction, appeared uncomfortable, speaking haltingly in heavily accented Urdu, a mark of his upbringing in Dubai and London. He stumbled through the outgoing government’s achievements before asking listeners to “promise” to vote for “Aunty Faryal”—one of Zardari’s sisters—who is contesting the Bhutto family seat.

Few party faithful gathered at the shrine were impressed. “Bilawal should not listen to anyone and come out into the public to see the workers as his mother and grandfather did,” says Khawaja. In contrast, their main rivals, cricket star Imran Khan and former prime minister Nawaz Sharif, have kicked off major campaigns drawing tens of thousands.

PPP spokesman and former cabinet minister Qamar Zaman Kaira says that the party respected people’s desire to see Bilawal but said the danger was too great: “We can’t expose Bilawal to the real threat of terrorism. We can’t risk the life of another top leader.”

The Taliban have directly threatened the PPP and its main coalition partners, the Awami National Party and Muttahida Qaumi Movement, which are often described as “secular.”

During Pakistan’s last election campaign, Bilawal’s mother, former prime minister Benazir Bhutto, defied repeated threats to address enormous rallies across the country. When she was killed in a gun-and-suicide attack after an election rally in Rawalpindi on Dec. 27, 2007, it shook the country, and shocked the world.

Aged 24, Bilawal is chairman of the party but ineligible to run for office until his 25th birthday later this year. Analysts say he appears uncomfortable in public and needs to work hard on improving his language skills. Zardari, said to be deeply paranoid about security, is also rarely seen in public. He remains unpopular over a multitude of corruption allegations. (The Lahore High Court has also barred Zardari from campaigning, stating that as president he is required to be nonpolitical.)

“We want Bilawal to come here, to see us, to talk to us and address the workers’ problems. We miss the love and affection of his mother and grandfather,” says Muhammad Urs, 41, who sells snacks in the Garhi Khuda Bukhsh market. Urs, a lifetime PPP voter, threatened not to cast his ballot “until they come and talk to us.”

But the PPP’s Kaira dismissed big rallies as winners of elections, instead pointing to television and the Internet to reach larger audiences, even though the percentage that has regular online access is tiny. “We believe that our message is going all over,” he says.

Muhammad Panah Soomro, a laborer in the village of Bangaldero, not far from the Bhutto shrine, is furious. “I will show them my shoe if they will come here to seek my vote,” he says. The roof of his two-room house was blown off by heavy rain and he has no money to replace it. “Bilawal doesn’t come here. He’s a rich man and lives abroad. His father is the biggest goon and has looted away his mother’s party and wealth.”

Critics point out that the PPP has presided over the country as the economy has worsened and security has deteriorated, and they blame it for failing to do more to improve people’s lives. They say that a dynastic party, obsessed with the martyrdom of its fallen leaders and pilloried for corruption and incompetency, is losing touch with the center-left progressive ideology on which it was founded in 1967.

Rasul Bakhsh Rais, a social sciences lecturer at the Lahore University of Management Sciences, says that despite the security threat restricting PPP rallies, candidates have been campaigning well at the grassroots level. “I expect them to put a good show. It’s not possible to predict now how big a victory they will gain and whether they will form the next government or not, but I think they will get good results.”

They Who Have Sindh