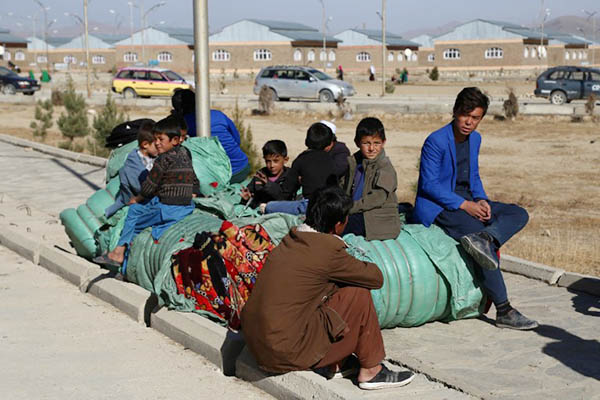 Abdul Rahman and his family drove all night in a rented car to escape the “absolute terror” of escalating violence in Afghanistan’s southeast, joining thousands abandoning their villages in Hazara-dominated districts.

Rahman, 65, reached the provincial capital Ghazni on Thursday after a grueling 20-hour journey made even longer by their vehicle breaking down along the way. “People have left their homes and are running for their lives from Jaghori district,” Rahman told AFP. “It was absolute terror in our area.”

Rahman’s family is among hundreds displaced by intense fighting as the Taliban battle ethnic Hazara militia and government security forces in previously safe Jaghori and Malistan districts. They have taken refuge in Ghazni city’s mosques and hostels as well as the homes of relatives.

Rahman said the exodus had pushed the cost of renting a car to 5,000 afghanis (around $70)—a tenfold increase in a matter of days.

Several thousand more people have escaped to neighboring Bamiyan province in Afghanistan’s central highlands, provincial governor spokesman Abdul Rahman Ahmadi said. “Almost all the people from my village [in Jaghori] have fled,” Nasir Ali, 38, told AFP. He and his family abandoned their home on Tuesday and went to Bamiyan.

Ali and other men from his village had spent several days and nights trying to defend their homes from the Taliban. But “the situation was getting worse day by day and we had no choice but to flee,” he said.

Taliban fighters—who mainly belong to the Pashtun ethnic group and follow the Sunni branch of Islam—began attacking Jaghori and Malistan more than a week ago, after violence spilled across the border from Uruzgan province. Hazaras, the most progressive ethnic group in the country, are mainly Shia Muslims and there are growing fears the fighting is rooted in ethnic and sectarian differences, a shift from the Taliban’s ongoing insurgency targeting government and international forces in Afghanistan.

Afghan security forces say they have stepped up ground and air offensives in the restive region, and U.S. Forces also have launched air support, including aerial surveillance.

The Afghan Red Crescent Society has dispatched truckloads of food, tents and blankets to the hundreds of families still believed to be trapped in the districts, but Taliban roadblocks have so far prevented the aid from reaching them.

Hundreds of people, including civilians, militia, commandos and militants, have been killed, according to figures provided by locals and government officials. But ongoing fighting, poor telecommunications and apparent dissembling by government officials have made it difficult to obtain more precise figures or information.

The fighting has angered many Hazaras, who blame the government for failing to protect the minority ethnic group. Hundreds of demonstrators took to the streets of Kabul earlier in the week to demand the deployment of military reinforcements to the Hazara districts under Taliban attack.

The escalation in fighting comes amid a flurry of diplomatic activity to convince the Taliban to negotiate an end to the 17-year war.