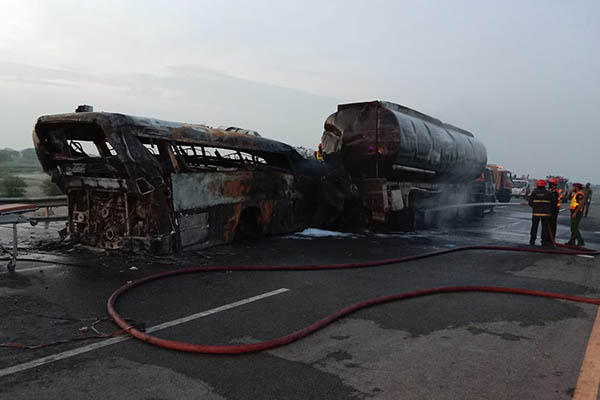 At least 20 people were killed and six others injured early on Tuesday morning after a passenger bus collided with an oil tanker on the Multan-Sukkur Motorway (M-5), local government officials confirmed.

The bus was traveling from Lahore to Karachi when the collision occurred. In a statement, Multan Deputy Commissioner Tahir Wattoo said the bus had crashed into the tanker’s rear at the Jalalpur Peerwala interchange, resulting in a fire that had engulfed both vehicles.

All 20 deceased perished on the spot, the statement added.

A statement issued by Rescue 1122 said the accident took place at 2:20 a.m. and required several hours of effort by firefighting teams to extinguish the flames. Photos of the crash showed the charred wreckage of the bus and oil tanker, which was reportedly carrying thousands of liters of petrol. A government spokesperson said that investigations were ongoing, but the likely cause of the accident was the bus driver falling asleep and crashing into the tanker.

The deputy commissioner, meanwhile, said that several of the deceased were burnt beyond recognition, adding that the process of DNA testing was underway to identify them.

According to local media, the bus was carrying 24 passengers and two drivers.

Expressing grief over the lives lost, Elahi also extended his condolences to the bereaved families and directed authorities to ensure the best possible medical treatment was provided to the injured.

Separately, Prime Minister Shehbaz Sharif posted a statement on Twitter expressing his grief over the incident. “I am saddened by the loss of 20 precious lives in the accident. My prayers are with the bereaved families,” he wrote.