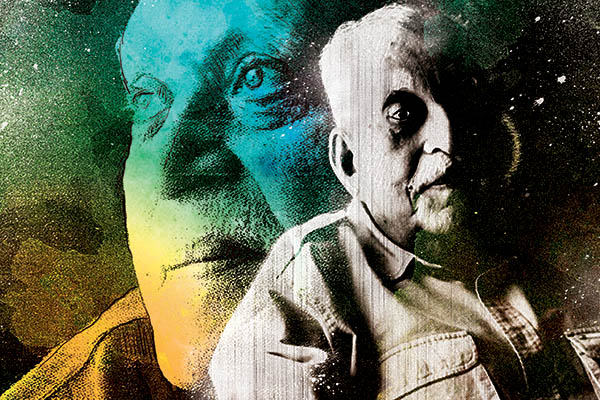 It was in March 1965 when I first met Jamil Ahmad, whose late-in-life collection of short stories, The Wandering Falcon, based on his administrative experience in Pakistan’s federally administered tribal areas was shortlisted for the Man Asian Literary Prize in 2011.

Back then, 39 of us from the Civil Service and Foreign Office were sent out on what used to be called the Frontier Tour, and one of our first meetings in Peshawar was with Ahmad, the-then political agent for Khyber.

We were ushered to the small but verdant garden of the grand old Colonial house where Ahmad lived. When he joined us, we all stood up—as protocol demanded. He was well over six feet, slim, ruggedly handsome. His eyes were a piercing gray-green: awe inspiring when he looked at you inquisitorially, but exuding geniality and warmth when he was smiling and at ease with you. We came away impressed by his command over Pashto, his intimate knowledge of the tribes he was administering, and his delicious barbecue. Shortly after our visit we learned that Ahmad had been transferred out of his position on the orders of the Nawab of Kalabagh, who was governor of West Pakistan at the time.

I got to work with Ahmad in Balochistan. In 1981, during the Soviet occupation of Afghanistan, I was posted as finance secretary in Quetta. The province was ruled by the governor, the able Lt. Gen. Rahimuddin Khan, and Ahmad served as chief secretary. It was during this time that I got to know Ahmad and his German-born wife, Helga, who kept a maternal eye over those of us who were spouseless in Quetta.

Ahmad was an old-fashioned civil servant. He epitomized a rare combination of leadership qualities: he was liberal, dedicated, hardworking, and yet in his leisure time knew how to let his hair down and relax. He was an avid reader, a devoted bridge player, extremely kind and considerate to his subordinates, and he was not afraid of giving honest advice to his superiors—even when he knew this was not what they wanted to hear. He had no time for humbug. On the weekends he would, when in season, organize wonderful duck shoots to Bund Khushdil Khan in Pishin. I was fortunate to be invited to these events. Ahmad would also join in the ping-pong games organized at my house, with the table and equipment generously contributed by the local-government secretary.

Ahmad’s integrity was legendary, both in a financial and personal sense. He never expected or wanted any handouts from the government and looked somewhat disdainfully at civil servants who did. I recall that when I went to the Quetta Secretariat for the first time I was intrigued to find in the open garages near the entrance four brand new Toyota Corollas neatly parked—and chained. On inquiring I was told that these were meant for the four provincial ministers, who never came because the governor had decided against it. Chief Secretary Ahmad had the vehicles secured to avoid any potential misuse.

That winter we had a gas crisis. Supply was shut off despite a special arrangement to provide gas to all government residences in the very cold winter. During the Monday morning meeting of all secretaries, one of the participants said that it was a particularly cold winter and there was need to provide gas for heating, immediately. Ahmad gave the secretary an icy glare and advised him to use an extra quilt or two.

I remember this one health-policy meeting chaired by Ahmad with the additional chief secretary Saleem Gillani, health secretary Dr. Hussainee, and myself in attendance. Hussainee spoke in an anglicized accent, punctuated every now and then with his favorite expression, “Quite right.” After Gillani expressed a viewpoint, Hussainee chimed in, “Quite right!” I expressed a dissenting opinion, and Hussainee responded, “Quite right!” Ahmad looked witheringly at Hussainee and said pointblank, “Hussainee, you cannot agree both with Saleem and Mueen because they are making two conflicting recommendations.” Undeterred, Hussainee smiled sheepishly and replied, “Quite right.”

Ahmad had an incisive mind, his years in the bureaucracy having taught him the value of rational and logical thinking. He had served at a key time in Kabul, prior to the Soviet occupation, and would look at issues with the trained mind of an intelligence officer. It was his extensive experiences that provided him with the insight into tribal issues and equipped him with the ability to articulate tribal customs and values as well as he did in The Wandering Falcon.

Politically, Ahmad could not be labeled either a conservative or a socialist. His liberal way of thinking and his close identification with the underdog made him sympathetic to the more radical political parties, but there was a strong sense of disillusionment when such parties failed to deliver. He believed in a democratic order and had little sympathy for those who paid mere lip service to the concept. He can best be described a Fabian Socialist.

Ahmad’s nonconformist and individualistic streak endeared him to his subordinates. But this was not always the case with some of his contemporaries or seniors. The latter would sometimes describe him as inflexible or rigid. It was, therefore, not entirely unexpected, although it seemed so at the time to us in Balochistan, that he developed a difference of opinion with Governor Rahimuddin over certain issues. To some of us, at the time, this appeared to be tragic since the combination of these two individuals had provided a fillip to economic development as well as lessening corruption in the province.

The clash between the governor and the chief secretary was not so much a clash of personalities as an institutional clash between two different methods of governance. While the governor adopted a top-down approach and expected orders to be implemented without question, Ahmad believed in a bottom-up way of thinking and believed that the chief secretary ought to be consulted whenever a critical personnel decision was taken by the governor. The episode ended in Ahmad’s early retirement from the civil service and deprived the country of the services of one of its most honorable and able public servants. It was also a prelude to the end of an era of sound governance in Balochistan.

It was my privilege to continue to interact with Ahmad right to the end. We had many enjoyable encounters watching and discussing cricket as well as exchanging views on books to read. He invited me to be one of the speakers at the launch in Lahore of The Wandering Falcon. He inscribed my copy of his book with the words, “In remembrance of things past”—a reference to my introducing him to Proust in Quetta as well as to the many convivial times that we spent together. Jamil Ahmad, the upright but certainly not uptight bureaucrat, is sorely missed by all who had the good fortune to know him. He died in July 2014 at the grand old age of 83.