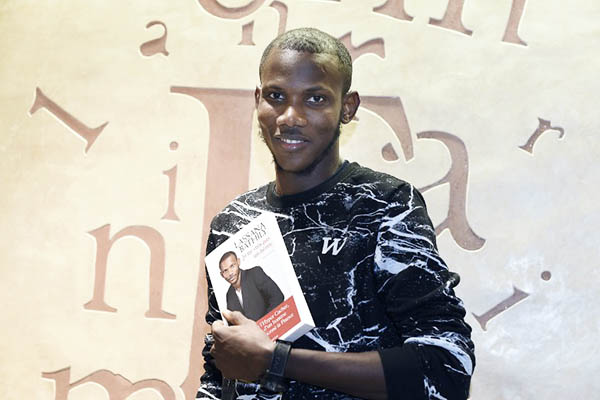 Lassana Bathily was the Muslim who saved Jews in Paris last year.

Lassana Bathily was an undocumented migrant from Mali until he became an unlikely hero by saving shoppers’ lives during the jihadist attack on a Jewish supermarket in Paris a year ago.

The 25-year-old became the one positive story to emerge from the three days of violence in January, when jihadist attacks on the Charlie Hebdo satirical weekly, police and the Jewish Hyper Cacher supermarket in the east of the capital killed a total of 17 people.

“Ah, here is my favorite Frenchman,” cried President Francois Hollande when he received Bathily at the Elysee Palace a fortnight after the carnage.

Bathily, a shelf-stacker in the supermarket, helped save shoppers from gunman Amedy Coulibaly on that fateful day, Jan. 9, 2015.

The narrative of a Muslim saving Jews from a jihadist made him a positive symbol of France’s diversity. But as he writes in his book I’m Not a Hero to be published Wednesday, heroism has been an uncomfortable mantle for Bathily.

“The next morning, I turned on Facebook and 800 people had asked to be my friend,” he told AFP. “In the days that followed I said ‘No, I’m not a hero’. I did something that had to be done.”

Bathily was just a few minutes from the end of his shift at the supermarket, unpacking frozen items in the basement, when he heard a flurry of gunfire upstairs and saw around a dozen people fleeing down the stairs.

Coulibaly, who claimed he was working in the name of the Islamic State group, had taken several shoppers hostage upstairs and ordered a cashier to go round up the others. Some of those who were huddled downstairs obeyed, but others refused to go and Bathily urged them to use the goods elevator to escape.

When no one wanted to take the risk, he ushered them into the refrigerated room, flicking off the light and the motor, and then made his own escape via the elevator and a fire escape.

“My heart was beating so hard that I was scared I’d be heard,” he said. Once outside, he helped police sketch out the layout of the shop and prepare their raid. A few hours later, they stormed in and shot Coulibaly dead.

Some say Bathily’s role was exaggerated by media and officials hungry for a good news angle.

“The media and officials wanted to paint this pretty picture, that he helped us escape downstairs, that he hid us, and so on. Which wasn’t really true, but that’s not Lassana’s fault—at that moment, we needed a hero,” one of the former hostages later told the Liberation newspaper.

Bathily is not bothered by the backlash. “If they now say that I didn’t do anything for them, that’s their problem. I won’t play their game,” he said.

Several days after the violence, Bathily was granted French citizenship by the president himself, something he says had been a dream since his childhood in a small village on the Mali-Senegal border. But Bathily was passed over for a Legion d’Honneur, France’s highest award, according to nominations published Friday.

He returned to a hero’s welcome in Mali, where he was offered free rooms in top hotels and was received by President Ibrahim Boubacar Keita.

Bathily has set up an aid group to provide basic facilities in his village, which he left aged 16 to seek work in Paris. But he has also had trauma to overcome. He lost close friend and colleague Yohan Cohen—one of the four killed by Coulibaly that day—and just a few days later, he heard that his younger brother Boubakar had died from a longstanding illness.

Moreover, deadly reminders of the terrorist threat seem to have dogged his life.

Bathily was just 300 meters away from the Bataclan venue in Paris when it was attacked on Nov. 13. “I ran like everyone else. But I was stuck in the neighborhood. I didn’t get home until 5:00 a.m.,” he said.

Just a week later, jihadist gunman attacked the Radisson Blu Hotel in the Malian capital of Bamako—one of the hotels Bathily had stayed in during his recent visits.

He remains sanguine: “It’s not the terrorists who can kill me—if God decides that I will die, I will die, it’s not they who will decide.”

The media circus has had its benefits—he was given new social housing and a job at the Paris town hall. He is studying and dreams of becoming a teacher.

“I just continue to live, I continue to do what I did before,” he said. “We must show solidarity, we must stay united. There is hope.”