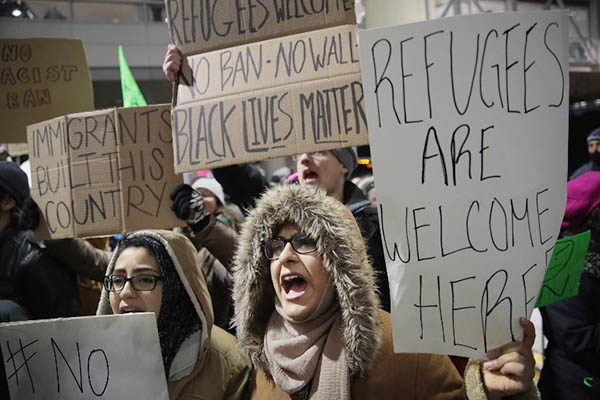 The new directive, which temporarily closes U.S. borders to all refugees and citizens from six mainly Muslim countries, was unveiled on Monday as a replacement for one issued in January that was blocked in the federal courts. The new order denies U.S. entry to all refugees for 120 days and halts for 90 days the granting of visas to nationals from Syria, Iran, Libya, Somalia, Yemen and Sudan. It is due to take effect on March 16.

The first order had also applied to citizens of Iraq but the country was dropped from the new list.

“Putting a new coat of paint on the Muslim ban doesn’t solve its fundamental problem, which is that the Constitution and our laws prohibit religious discrimination,” said Omar Jadwat, director of the ACLU’s immigrant rights project. “The further President Trump goes down this path, the clearer it is that he is violating that basic rule.”

The ACLU, the preeminent U.S. civil liberties group, and the National Immigration Law Center brought the suit on behalf of the International Refugee Assistance Project and the refugee resettlement group HIAS, as well as several individuals. The suit alleges that the new executive order violates the constitutional protection of freedom of religion in that it is “intended and designed to target and discriminate against Muslims, and it does just that in operation.”

“Rarely in American history has governmental intent to discriminate against a particular faith and its adherents been so plain,” the complaint says, alleging the new order will cause “irreparable harm” and asking for an injunction.

A federal judge in Maryland, Theodore Chuang, has scheduled a hearing in the case for March 15—the day before the measure is to take effect.

Meanwhile, the state of Maryland said on Friday it would join a suit filed by the attorney general from Washington state, which also has the support of Massachusetts, Minnesota, New York, and Oregon. “President Trump’s second executive order is still a Muslim ban,” Maryland Attorney General Brian Frosh said in a statement. “The administration persists in an effort to implement a policy that is inhumane and unconstitutional, but also makes us less safe, not more safe.”

The motion filed by Washington state calls on a federal court to apply an existing injunction against the first travel ban issued in January to the new executive order unveiled on Monday. The state of Hawaii has filed a separate complaint, and a hearing in that case on whether to impose a national restraining order is set for March 15 as well.

The White House cites national security in justifying the ban, arguing that it needs time to implement “extreme vetting” procedures to keep Islamic militants from entering the country. Polls show American public opinion is deeply divided on the issue. Most indicate a slight majority of voters opposed, with strong support among Trump’s political base.