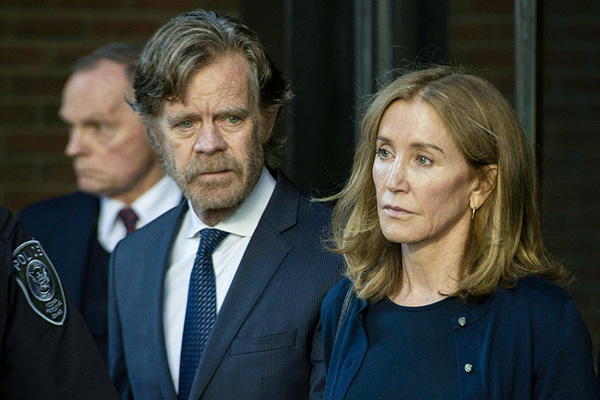 Actress Felicity Huffman is escorted out of a courthouse by her husband William H. Macy. Joseph Prezioso—AFP

Actress Felicity Huffman was given two weeks jail time on Friday for paying bribes to help her daughter gain admission to a prestigious American university, the first high-profile figure to be sentenced in a cheating scandal that rocked America.

The Desperate Housewives actress, wearing a navy blue dress and cardigan, looked ashen-faced as she left the federal courthouse in Boston, Massachusetts, clutching the hand of her husband, actor William H. Macy.

Huffman, 56, was the first parent to be sentenced among 50 people indicted in an elaborate and wide-ranging scam to help children of the elite secure places in top U.S. colleges. The Oscar nominee pleaded guilty in May during a tearful court appearance to paying $15,000 to boost her daughter’s SAT college entrance exam score.

Judge Indira Talwani told Huffman it was important to send a message to other parents that they can’t use their wealth to cheat more deserving students. “I think without this sentence you would be looking at a future with the community around you asking why you had gotten away with this,” she said, according to media outlets in the courtroom.

The judge said Huffman could rebuild her life after serving the sentence, which also includes a fine of $30,000 and 250 hours of community service. “After this, you’ve paid your dues,” she said.

Huffman must report for prison on Oct. 25.

The actress apologized to students and parents and said she accepted the judge’s decision. “I broke the law. There are no excuses or justifications for my actions. Period,” the actress said in a statement. “My hope now is that my family, my friends and my community will forgive me for my actions,” Huffman added.

Federal prosecutors had asked that Huffman be given a month in jail. Her defense team recommended a sentence of a year’s probation and a $20,000 fine.

Her guilty plea avoided what would have been a well-publicized trial and potentially lengthier jail sentence. The crime is punishable by up to 20 years in prison and a fine of as much as $250,000.

Huffman announced her intention to plead guilty in April, saying she was “ashamed” of what she had done.

The scandal erupted in March when the ringleader behind the scam, William “Rick” Singer, admitted running the elaborate system which ranged from cheating in entrance exams to bribing coaches to help non-athletic students get scholarships. Authorities say he was paid about $25 million to bribe coaches and university administrators. He has pleaded guilty and is cooperating with authorities. His sentencing will take place on Sept. 19.

In June, a former Stanford University sailing coach was the first to be sentenced, receiving two years of supervised release. John Vandemoer, 41, had pleaded guilty in March for accepting payments to the program totaling $610,000 “in exchange for corrupting the admissions process of a major university,” prosecutors said.

A Chinese family admitted to paying Singer $6.5 million to guarantee their daughter admission to Stanford, with Vandemoer’s help, though the mother said she was duped into believing the sum was a charitable donation.

Besides Stanford, some of the universities targeted in the elaborate cheating scam include University of Southern California, Yale, Georgetown and UCLA. None of the schools or the students have been charged in the case.

Actress Lori Loughlin from 1980s-90s sitcom Full House has also been accused. She and her husband have pleaded not guilty and are awaiting trial.