Aden Residents Turn on U.N. For Failing to Deliver Aid 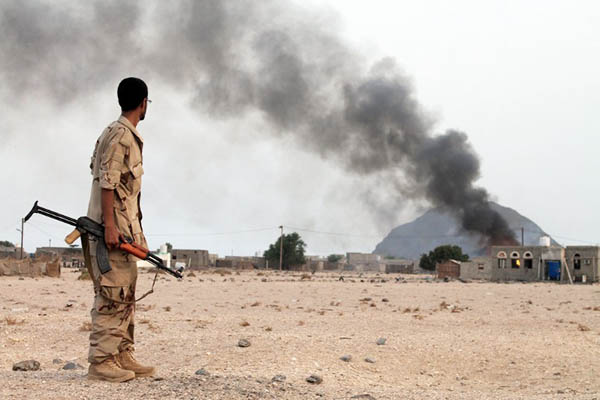 Yemeni activists say war-torn city is on the verge of famine as Saudi airstrikes persist despite truce.

Frustrated by the U.N.’s failure to deliver desperately needed aid, residents of Aden in war-torn Yemen have started to vent their anger at the world body and at rebels besieging their city.

“Aden is on the verge of famine,” said local activist Mohammed Mossaed. “We don’t need the truce of [U.N. envoy] Ismail Ould Cheikh Ahmed. We want an end to the siege so that aid enters the city by land and sea,” he said, in a bitter tone.

Ships carrying aid from U.N. relief agencies waiting off Aden have not been able to dock because of security risks. The rebels have also prevented a convoy carrying aid from Hodeida port from entering Aden, local activist Adnan al-Kaf said.

“Frankly, there has not be a fundamental change on the ground that would allow aid disembarkment in Aden,” said Abeer Etefa, a spokeswoman of the U.N.’s World Food Program. Three aid-loaded ships continue to wait off Aden, she said Monday. On Friday, she told AFP the truce was “our final hope” to reach the needy.

The U.N. had hoped that the six-day truce would last until the end of Ramzan. But just hours after it formally went into effect, the Saudi-led coalition resumed raids and fresh clashes broke out between rebels and pro-Hadi fighters.

The coalition brushed aside the ceasefire, saying it did not receive a request from Hadi’s government to halt attacks, while the leader of the Houthi rebels said he did not expect the truce to take hold. “What truce is the U.N. talking about… when we are being bombed by the Houthis and the prices of tomatoes and potatoes have gone up six fold?” said resident Yasser Mubrarak.

He summed up the feeling of Aden inhabitants who find themselves trapped in the middle of a fierce conflict where they barely find enough to eat. “The truce only benefits the houthis. This is what also happened during the first truce when no aid reached Aden and it was all carried to Hodeida,” a rebel-held western port, said Anis Obbad, another resident of Aden.

He was referring to a five-day truce in May declared by the Saudi-led coalition to allow aid deliveries. “The only solution for Aden is a Houthi pullout and lifting of the blockade,” said Obbad.

A local official even accused the United Nations of “collusion” with the Houthis.

Nayef al-Bakri, vice governor of Aden and who now heads its Resistance Council, Monday condemned “the inability of the organization to provide protection” for aid-loaded ships. He also slammed the U.N.’s delivery of 38 lorries carrying aid to Aden neighborhoods that are held by the rebels, while it failed to bring aid into areas controlled by the other side.

The rebels for their part have accused the United Nations of not exerting enough pressure to end the Saudi airstrikes. “The U.N. and international community should assume their responsibility to end the aggression and the blockade imposed on the Yemeni people,” said Saleh al-Sammad, who heads the rebels’ politburo.

The United Nations has declared Yemen a level-3 humanitarian emergency, the highest on its scale, with nearly half the country facing a food crisis. More than 21.1 million people—over 80 percent of Yemen’s population—need aid, with 13 million facing food shortages, while access to water has become difficult for 9.4 million people.

The U.N. says the conflict has killed more than 3,200 people, about half of them civilians, since late March.