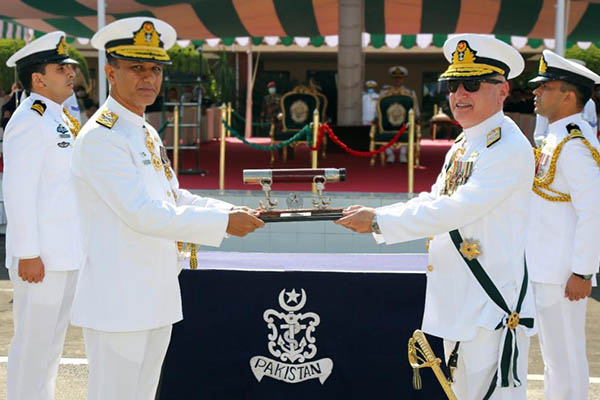 Admiral Muhammad Amjad Khan Niazi on Wednesday assumed command of the Pakistan Navy as the 22nd Chief of Naval Staff in a ceremony at PNS Zafar, Islamabad where outgoing Admiral Zafar Mahmood Abbasi symbolically transferred command to the new chief.

Admiral Niazi was commissioned in the Operations Branch of the Pakistan Navy in 1985 and won the coveted Sword of Honor upon completion of initial training at the Pakistan Naval Academy. Prior to his role as Naval chief, he has served as the commander of two Type-21 ships, PNS Badr and PNS Tariq, as well as the commander of the 18th Destroyer Squadron. Additionally, he served as Commandant PNS Bahadur; Commandant Pakistan Navy War College; Commander Central Punjab Lahore; Commander Pakistan Fleet and Commander Karachi.

The new Pakistan Navy chief has also served as the Principal Secretary to Chief of the Naval Staff, Deputy Chief of Naval Staff (Training and Evaluation), and Director-General Naval Intelligence. He is a graduate of the Army Command and Staff College, Quetta, as well as the National Defense University Islamabad. The admiral also holds a Masters Degree in Underwater Acoustics from the Beijing University of Aeronautics and Astronautics, China.

In his farewell address, outgoing Naval Chief Admiral Zafar Mahmood Abbasi thanked Allah for allowing him to discharge his duties to the best of his abilities with honesty, justice and dignity. He stressed that his primary focus had been to transform the Pakistan Navy into a combat-ready force with special emphasis on optimal battle-preparedness and professional competence.

Praising the untiring efforts of the officers and men of the Pakistan Navy for working as a team to achieve progress in line with his vision, he highlighted the volatile geopolitical landscape, and heightened tensions of recent years. Referring specifically to the situation arising after the Pulwama incident in India-held Kashmir, he said that the unified stance of Pakistan’s civil and military forces had frustrated Indian designs. He said Pakistan’s armed forces had given a befitting response and won the battle of hearts and minds, shattering the myth of India’s false sense of superiority.

He also applauded the professionalism displayed by the Pakistan Navy in detecting an intruding Indian Navy submarine in Pakistani waters.

He concluded his address by congratulating Admiral Muhammad Amjad Khan Niazi on his appointment and said he was confident he would lead the Navy to new heights.