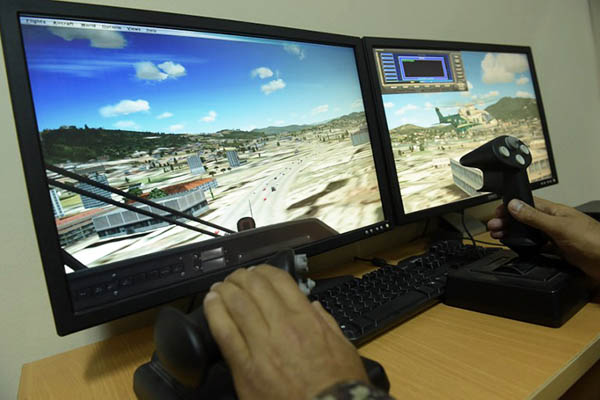 Clutching a radio in his hand on a barren hill surrounded by desert peaks, Sahil prepares to guide a pilot flying low overhead toward his training target—the third car in a convoy below. Under pressure from the Taliban, Afghanistan’s military is increasingly relying on the country’s young air force, and, together with Western allies, is speeding up its training of pilots and ground controllers in order to strike the enemy.

Once a strong flying power supported by the Soviet Union, Afghanistan’s air force was decimated by the civil war of the 1990s and the turbulent period of Taliban-rule. By the time Western forces started rebuilding it in 2007, there were only a handful of MiG fighters left.

“There are currently 78 trained and available aircrews in the Afghan Air Force,” says Captain James Smith, spokesman for the U.S. 438th Air Expeditionary Wing, which is responsible for training the Afghans. But there is still a long way to go. The AAF now has around 100 aircraft, including 27 MD-530 attack helicopters, and about 20 small support aircraft, such as the Brazilian built A-29 Super Tucanos—used against drug traffickers in Latin America. It also has approximately 50 Russian Mi-17 transport choppers.

“With the three main bases in Kabul, Kandahar and Shindand, the bad guys know [the AAF] can strike anywhere in the country,” says Captain Smith, adding: “I have been in an MD-530 when firing a rocket and believe me, it’s no joke.”

The “bad guys”—the Taliban—have stepped up their insurgency to record levels following the withdrawal of foreign combat troops in 2014, inflicting more than 5,000 deaths on government forces last year.

Along with training pilots, NATO is also trying to ensure there are enough skilled Afghan Tactical Air Coordinators (ATAC) on the ground. Hence the exercise in this desert base in Logar to test the abilities of young pilots and future ATACs—“the eyes and ears” on the ground, according to one of the five being trained that day. “When you are in flight it’s very difficult to tell who’s on the ground—you need to have someone who tells you who is who,” explains Air Force Colonel Andrew Jannsen, the man overseeing the training.

Twenty-two year old Akram, considered by his trainers to be among the most promising, is critical of Sahil’s performance despite the fact he helped the missiles hit their target using a handheld laser device. “They talk too much, it [took] too much time,” he says.

There are three key points the controller must convey: his own position, that of the enemy, and any civilians in the area. But the growing strength of the AAF has been accompanied by a rising number of unintended deaths: according to the U.N., 133 civilians have been killed and 159 injured in airstrikes since Jan. 1, a 72 percent rise on the same period in 2015—with Afghan crews responsible for two thirds of casualties.

It is a statistic that Major General Wahab Wardak, Commander of the Air Force, regrets. “Unfortunately, Taliban often hide in homes. We issue orders to avoid bombing residential zones but these things happen in war,” he says.

“To mitigate civilian casualties the ATAC is the bigger factor,” says Colonel Janssen. “And the pilots themselves can call off the mission if they don’t find themselves comfortable.” He insists that the officers are also briefed on ways to reduce casualties—unlike in the Soviet-era when, according to Janssen, the mantra was to strike first, ask questions later.

Flying is a dream for many young Afghans. Some “1,800 to 2000” apply for each batch of the Afghan Air Force Academy in Kabul, says its commander Colonel Naqitullah Woror. Of this number, around a hundred 18 to 26-year-olds get picked in the first selection. Each recruit is subject to intensive background checks by Afghan intelligence, and must also be sponsored by two officers to attest they have no links to the enemy.

So called ‘green-on-blue’ attacks in which Afghan troops turn their weapons on Coalition partners have been a frequent occurrence in recent years, with two Americans dying in such an incident near Kabul last week. “This has never happened with us,” says Woror.

Six women are currently at the academy, hoping to follow in the footsteps of Captain Niloofar Rahmani, the country’s first female pilot who graduated in 2013 and finished her training in Arkansas. Piloting an aircraft in a flight simulator, female recruit Shamin, 22, says she joined the academy “with the blessing of my family,” despite living in a society that is often reluctant for women to take on such roles.