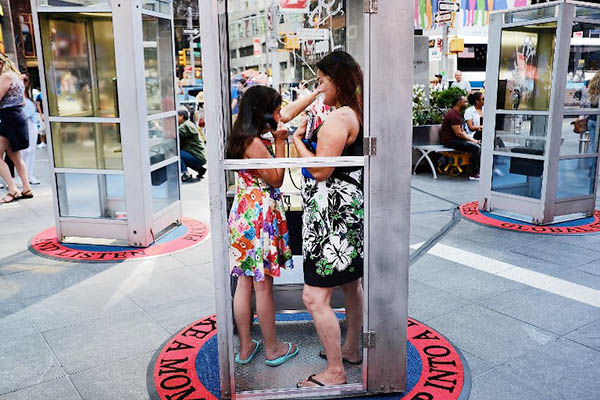 They may be fast disappearing from the streets of New York, but an Afghan-American artist has installed public telephone booths in Times Square to spotlight the immigrant experience in Donald Trump’s America.

New York today boasts no more than four public phone booths, the last vestiges of a pre cellphone era. The arrival of three in Times Square as part of Aman Mojadidi’s Once Upon a Place installation has nearly doubled that number.

Passersby can pick up the handset, but cannot talk. Instead they listen. At the end of the line are the voices of New Yorkers telling their personal stories of immigration—legal or illegal—from around the world. Mojadidi asked each to narrate their experiences in their own language for a maximum of 15 minutes, without interrupting with any questions. Nor has their testimony been translated into English.

“Even if you don’t understand the language, you can feel the emotion as if it is a song maybe,” he explained to AFP.

The art project boasts more than five hours of recordings from 70 different New Yorkers and will remain in Times Square until Sept. 5.

Mojadidi first started working on the project in 2014, well before Trump ran for president and unleashed vehement rhetoric against unauthorized immigrants and took office attempting to restrict immigration from certain Muslim countries. The shifting political environment saw Mojadidi scrap initial plans to dot the project around the city and hold formal workshops in different communities. He said his subjects became “very nervous” about the idea. “’Why do we need to come there? Who else is going to be there?’” he quoted them as saying. “In the end, it was all very one on one. So the way I implemented the project changed a lot.”

Nor is the choice of telephone booths insignificant. “When I learned how phone booths were starting to be removed from the streets, not just in New York but in other cities around the world, I immediately thought about all of the stories that are trapped inside of these phones,” he said. “I thought of a natural way to bring stories back to the streets by using the phone booths, bring back the spirit of the phone booths.”