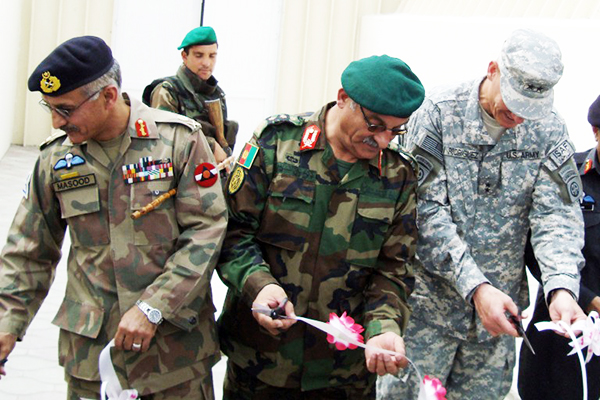 Pakistan could end the Afghan war “in weeks” if it were serious about peace, Afghanistan’s Army chief, Gen. Sher Mohammad Karimi, said in an interview broadcast on Wednesday.

Speaking to the BBC, Karimi laid bare the mistrust between Kabul and Islamabad as U.S.-led troops wind down more than a decade of war against Taliban and other insurgents.

“Yes, it will be done in weeks,” Karimi said when asked if Pakistan could end the Taliban’s fight against the Kabul government if it wanted. He said “the Taliban are under their control” and Pakistan could do far more to promote a nascent peace process.

Karimi blamed Pakistan for the turmoil in his country. By closing down madrassahs that serve as incubators of Islamist extremism, Pakistan had “unleashed” the Taliban on Afghanistan today, claimed the chief of the Afghan National Army.

He acknowledged that Pakistan is also reeling from terrorism. “Now Pakistan is suffering internally from terrorists as much as [we are]. We can both do together to fight this menace provided that [everyone is] sincere in what they’re doing,” Karimi said in the interview, which was recorded in Kabul on Saturday.

Karimi also said Pakistan was complicit in U.S. drone strikes despite its denunciations of the antiterrorist campaign. The “U.S. has not started drone attacks on their own,” he said, arguing that Islamabad had “given the lists” of militants it wants taken out.

“The drones are used against those Taliban who are Pakistani Taliban. The drones are never used against Haqqani or Afghan Taliban,” he said, in reference to one of the most feared Afghan insurgent groups. “That’s why that’s one of the issues when I’m saying that the peace to Afghanistan can come if us and Pakistan both will desire to have peace. Peace is in the hands of the U.S. and Pakistan. And Afghanistan.”

But Afghan President Hamid Karzai has long decried what he sees as Pakistani double-dealing designed to bring about a friendly regime in Kabul, and Karimi said this bad faith extended to Sharif’s objections to U.S. drone strikes in Pakistan’s northwest.

Pakistan’s Foreign Office hit back on Wednesday, taking exception to Karimi’s reported comments and describing them as “yet another attempt to malign Pakistan.”

“Allegations that Pakistan ‘controls’ the Taliban and has ‘unleashed’ them on Afghanistan have no basis. We reject them categorically,” reads the statement issued by Islamabad. “Pakistan has exercised extreme restraint in the face of highly provocative language [from] Afghan civil and military officials over the last few months, not to mention some totally fabricated accusations. Such comments also reflect insincerity on the part of some elements in the Afghan government.”

The statement continues: “On the specific request of the Afghan leadership itself, Pakistan has been fully supportive of the reconciliation process. Our concrete steps to facilitate this process, are well known. Pakistan will not be deterred in its efforts to support the international community’s efforts to bring peace and stability to Afghanistan. We would, however, hope that Afghan officials would refrain from leveling baseless allegation and work toward creating a conducive environment that helps advance the shared objectives of peace, stability, and prosperity.”