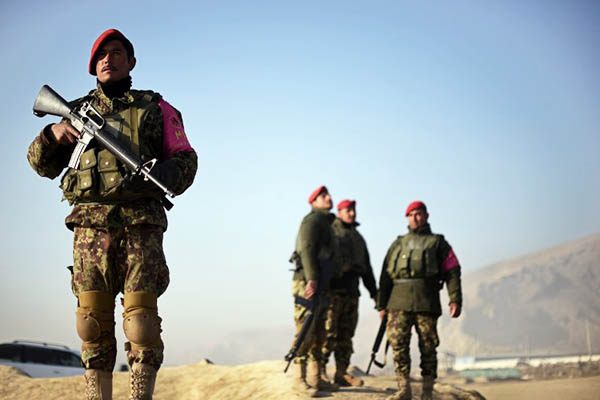 Of the 21 people on board, three have been killed by the Taliban, says a defense ministry statement.

The Afghan army launched an operation Wednesday to rescue 18 hostages captured by the Taliban after their helicopter crash-landed in the north, as the private firm operating the aircraft said it was shot down.

The Taliban killed three of those on board—two Afghans and a foreigner—in an initial firefight and took the rest captive after the Tuesday crash, the Afghan defense ministry said in a statement. The 21 people on board included two Moldovan pilots and a Moldovan engineer, the country’s acting prime minister Gheorghe Brega told reporters in Chisinau. He did not specify if the three were dead or captured, but the Afghan defense ministry said two foreigners were being held along with an unspecified number of Afghan soldiers.

The helicopter came down in the Pashtun Kot district of Faryab province, an area partly controlled by the militants. The Mi-17 was privately owned by the Valan ICC company in Moldova, according to Brega, and had been chartered by the Afghan army.

It made an emergency landing “due to technical reasons” near Maimana, the capital of Faryab province, the defense ministry statement said. “Later they encountered battle with the enemy. As a result, two army soldiers and one foreign national were killed and 18 others on board arrested by armed opponents of the government,” it said, without specifying whether all the Afghans on board had been soldiers.

However, Valan ICC said in a statement its helicopter had been shot down. “A distress signal from the crew was received. It informed the client that the helicopter had been attacked, that it had been shot and thus went down and burned. There was an emergency landing,” company chief Alexander Zagrebelny said in a statement. Zagrebelny said the helicopter and its three crew had been transporting 18 Afghan security force members at the request of the U.S. State Department. He denied there had been any technical problem. “This is a practically new helicopter in ideal condition.”

The Taliban in a statement on their website Wednesday said they had shot the helicopter down.

The insurgents fought off an initial attempt Tuesday by the Afghan army to rescue the surviving hostages, the ministry said. It said a fresh attempt was launched Wednesday but gave no immediate details. The Taliban said they had killed five people and were holding a further 15, and made no mention of any foreign hostages. They said the captives had “been taken to safe areas and are being investigated.”

Moldova does not have a diplomatic mission in the war-torn country and its foreign ministry requested assistance from the United Nations, while Brega said his country had appealed to the U.S. for help. The U.S.-led NATO coalition, which has 13,000 foreign troops in the country, has not yet commented on the incident.

Faryab province has in recent months been the scene of bitter fighting between Afghan troops and police and Islamist insurgents, who are increasingly active in the north. In late September the Taliban temporarily seized control of the provincial capital of Kunduz—the first time the group had taken control of a major city since being toppled from power in 2001.

Galvanized by the brief conquest, they launched assaults on other cities including Maimana, but were pushed back by heavily armed local residents while local security forces reportedly abandoned their posts.

The Taliban have in the past shot down several military helicopters with small-arms fire. In October a U.S. F-16 was struck by enemy fire in eastern Afghanistan, in a rare case of an advanced jet fighter coming under a Taliban-claimed attack.