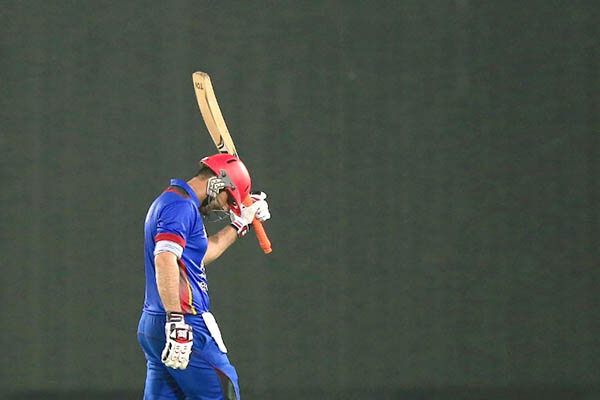 A “gutted” Afghanistan cricket chief Shafiq Stanikzai apologized to fans on Thursday after the team’s shock defeat by Hong Kong left their hopes of qualifying for the World Cup all but over.

After losses to Scotland and hosts Zimbabwe, new Test side Afghanistan’s hopes were hanging by a thread, but they collapsed to 195-9 in pursuit of 242 to beat Hong Kong, with rain ensuring a 30-run defeat on DLS method.

Victory for Hong Kong in either of their two remaining Group B matches against Scotland and Nepal would ensure Rashid Khan’s much-fancied Afghan outfit cannot even reach the Super Six stage. “Gutted, frustrated and extremely sorry for whatever happened in the ICC cricket World Cup qualifier,” Stanikzai wrote on Twitter. “But #Bluetigers, u r still the heroes of the nation thank u for whatever u did till date to the nation. Sorry beloved nation but we will come strong InnshaAllah.”

Mystery spinner Mujeeb Ur Rahman, 16, took 3-26 with Mohammad Nabi also claiming three scalps as Afghanistan restricted Hong Kong to 241-8, but they lost regular wickets in the chase. Tailender Dawlat Zadran struck a spirited unbeaten 40, but it was too little, too late as Afghanistan’s dreams of reaching a second straight World Cup were left in shreds in Harare.

Scotland became the first team to book their spot in the next round after beating Nepal by four wickets to make it three wins from three. But captain Kyle Coetzer, who hit a match-winning 88 not out in Bulawayo, slammed the ICC’s controversial decision to cut the number of teams in the World Cup from 14 to 10 as “crazy.”

“Never underestimate the power & quality of associate cricket, @CricketHK beat & knock out favorites @ACBofficials from the #WCQ2018, after qualifying through #wcl2,” he posted on Twitter. “UAE beat Holland the 13th ODI team & #wcl2 @NepalCricket showed lots of skill today vs us! A reduced WC is crazy!”

Another triumph for the Scots in their final group game against Zimbabwe would leave them well placed to claim one of the last two slots for next year’s World Cup in England and Wales.

An excellent unbeaten 99 from captain Jason Holder led the West Indies to a six-wicket win against Papua New Guinea, after the two-time World Cup champions had slipped to 58-4 while chasing 201 for a second consecutive victory in Group A. Ireland, who did not play on Thursday, remain top of the table on net run rate, while the United Arab Emirates look set to progress after a six-wicket win over the Netherlands.

Rohan Mustafa took 5-26 and Chirag Suri managed an unbeaten 78 as the U.A.E. sealed a crucial victory over the Dutch—four-time World Cup participants. “I think it was a very, very invaluable win for us. We know the magnitude of this win, so I am really, really happy I could contribute to the winning performance,” said Suri.