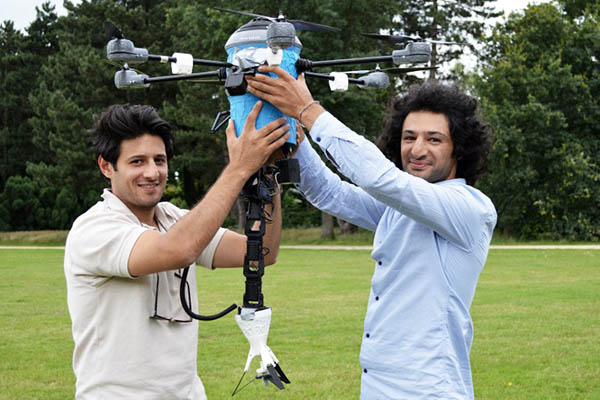 Former refugees Massoud and Mahmud Hassani stunned the world three years ago with an invention like a dandelion puffball that sought to rid the world of landmines. Now the Afghan brothers are back with their latest creation: a low-cost drone to detect and destroy mines, which each year claim thousands of lives.

Ridding the world of their childhood horror has become the life work of the Hassanis, who now live in the Netherlands. In 2013, they won worldwide acclaim for the “mine kafon”—a giant ball shaped like a dandelion-seed head that rolls around with the wind, its plastic stalks tripping landmines in the process.

Inspired by their childhood toys, the kafon—short for “kafondan” which in the Hassanis’ native Dari language means “something that explodes”—drew high praise from anti-landmine organizations.

Now their latest mine-hunting device combines drone technology, 3D printing and robotics with a metal detector to find and ultimately destroy landmines. Hinged on six arms with rotors that creates lift, the 4.5kg drone consists of a blue hard plastic casing that contains batteries, computer hardware and software and a global positioning system.

A robotic arm slung underneath is fitted with pincers that can remotely be opened and closed. The pincers can carry a metal detector or a small explosive charge, which the brothers say can be used to destroy a landmine. The on-board GPS allows it to plot its course via computer.

Massoud explains that the drone works in three stages: mapping, detecting and destroying. When deployed, a 3D mapping system scans the section that needs to be demined. Secondly, the mapped area is meticulously swept by the drones carrying a metal detector on a pre-programed path.

“This way the mine field in question can be scanned inch-by-inch,” Massoud told AFP at his workshop in the Dutch city of Eindhoven. Finally, the plan is to destroy the mines by using the drone to place a small charge on every mine to detonate it. “We believe this way mines can be cleared almost 20 times faster than what they are now,” Massoud said.

So far the duo has built three working prototypes, and have carried out demonstrations before the Dutch military, who say they are willing to help with further testing. “Clearing minefields is an incredibly time-consuming process,” said Major Fred de Vries of the Dutch army’s explosives ordnance disposal unit. “We see many possibilities to use drones” to save time to map and detect landmines in a given area, De Vries said.

The key phase will be to carry out field tests in Afghanistan, which the brothers hope to finance by crowd-funding. If all goes well, the pair believes the drone can be made for as little as 1,000 euros ($1,100) each.

Other opinions are guarded. One of them is the Halo Trust, the world’s largest humanitarian mine clearing organization.

It said despite having carried out some “small-scale trials with aerial mapping drones” it did not believe “drones will contribute significantly to the future of mine clearance.”

Drones are of limited use in areas covered with vegetation and in poor weather conditions, the trust said. And even if the drone did find a landmine “a trained human being will still be required to excavate and destroy it,” the trust said in a statement.

The brothers are using the Kickstarter online crowd-funding platform in the hope of raising 90,000 euros for the final tests. They want to take it to Afghanistan for testing within the next two months, the first time the brothers will be back in their native country since fleeing the Taliban-ruled Kabul in the late 1990s.

Three years ago a plan to return to Afghanistan to test the original kafon failed. The “puffball” idea—while praised for its low technology and cheapness—meant the device was at the mercy of the winds and could not cover a minefield systematically to guarantee it was cleared, as humans would.

“The mine kafon invention did a lot to create awareness of landmines,” Massoud Hassani said. “We felt that it was now time to do something even more concrete to destroy landmines,” he said.

Massoud, 32, fled Afghanistan in 1998, followed two years later by Mahmud, 30. After arduous treks through Pakistan and Uzbekistan the brothers finally made their way to the Netherlands and today hold Dutch citizenship.

Landmines are scattered in 78 countries, and each year kill between 15,000 and 20,000 people and maim countless more, according to U.N. figures. Despite huge progress in mine-clearing, Afghanistan remains one of the most-mined countries in the world.

Since 1989, around 703,000 anti-personnel mines, 29,000 anti-tank mines and more than 18 million other pieces of unexploded ordnance have been collected, according to the U.N. Mine Action Center for Afghanistan (UNMACA). There were at least 1,296 Afghan casualties in 2014 resulting from mines, victim-triggered improvised explosive devises and other ordnance left over from the Afghan war, the Geneva-based Landmine and Cluster Munition Monitor research group said.

“Our whole life is dedicated to the fight against landmines. As children we saw our friends lose limbs and die,” said Massoud. “It will be great to go back to our country bearing this gift.”