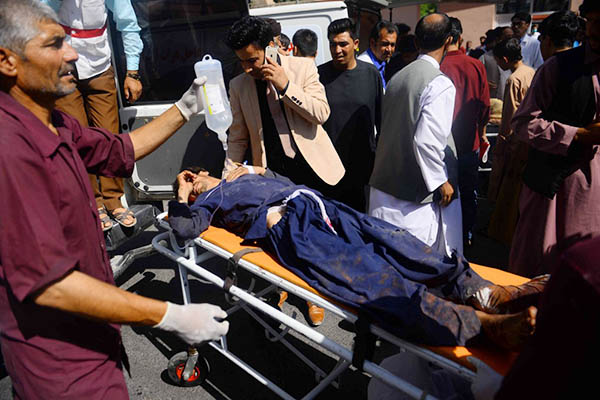 At least 28 people killed, 10 others wounded by what government spokesman claims was a ‘Taliban’ device

Dozens of passengers, mainly women and children, were killed in western Afghanistan early on Wednesday when the bus they were traveling in hit a roadside bomb, officials said.

The attack, which came one day after the United Nations said civilians are being killed and wounded at a “shocking” level in Afghanistan’s war, occurred around 6:00 a.m., authorities said. “A passenger bus traveling on the Kandahar-Herat highway hit a Taliban roadside bomb. So far at least 28 killed, 10 wounded,” said Muhibullah Muhib, the spokesman for Farah province.

All were civilians, mostly women and children, he said. Farooq Barakzai, a spokesman for Farah’s governor, confirmed the toll but warned it may rise higher. There was no immediate confirmation from the Taliban that it was behind the blast.

The group, which has resurged since its regime was toppled by the U.S. invasion in 2001, made a vague pledge this month to reduce civilian casualties.

Civilians have long paid a disproportionate price in the nearly 18 years since the U.S. invaded Afghanistan. On Tuesday, the U.N. released a report showing that casualties have dropped 27 percent in the first half of 2019 compared to the same period last year, which was a record—but nonetheless 1,366 civilians were killed and another 2,446 injured.

Child casualties represented almost a third of the overall total of civilian casualties. The U.N. also said that U.S. and pro-government forces caused more civilian deaths than the Taliban and other insurgent groups for the second quarter running. It branded efforts to reduce the violence “insufficient.”

The bloodshed is expected to rise after the launch this week of official campaigning in Afghanistan’s presidential election, set for Sept. 28.

At least 20 people were killed on Sunday, the first official day of the campaign, and 50 wounded when a suicide attacker and gunmen targeted the Kabul office of Afghan President Ashraf Ghani’s running mate, Amrullah Saleh.

There are also doubts the election will happen at all, with lingering questions about whether Afghanistan should hold a key poll amid a months-long, U.S.-led push to forge a peace deal with the Taliban.

This week U.S. Secretary of State Mike Pompeo said that President Donald Trump wants to begin withdrawing troops before the vote, though he emphasized in comments to reporters on Tuesday that there is “no deadline.” But the push has ignited widespread concern among Afghans that in Washington’s rush to exit its longest war the Taliban will be returned to some semblance of power.