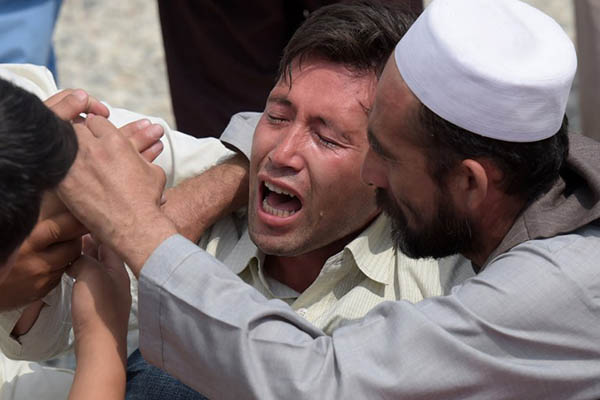 Civilian casualties in Afghanistan soared to a record high in the first half of 2016, the U.N. said on Monday, with children in particular paying a heavy price for growing insecurity as the conflict escalates.

The U.N. report, which comes days after the deadliest attack in Kabul since the Taliban were ousted from power in 2001, cited increasing ground combat around heavily populated areas as the leading cause of casualties.

Between January and June, 1,601 civilians were killed and 3,565 were wounded—a four percent increase in casualties compared to the same period last year, the United Nations Assistance Mission in Afghanistan (UNAMA) said. The casualties have reached their highest level since the U.N. began issuing its authoritative reports in 2009.

“Every single casualty documented in this report—people killed while praying, working, studying, fetching water, recovering in hospitals—every civilian casualty represents a failure of commitment and should be a call to action for parties to the conflict to take meaningful steps to reduce suffering,” UNAMA chief Tadamichi Yamamoto said. “Platitudes not backed by meaningful action ring hollow over time.”

The casualties include 1,509 children—roughly one third of the total—a figure the U.N. described as “alarming and shameful.” It was the highest toll ever recorded by the U.N. over a six-month period.

The statistics are a grim indicator of growing insecurity in Afghanistan as the Taliban step up their nationwide insurgency and the Islamic State group seeks to expand their foothold in the east of the country.

The U.N. report said insurgent groups including the Taliban were responsible for the majority—60 percent—of civilian casualties. But it also reported a 47 percent increase in the number of casualties caused by pro-government forces, compared to the same period last year.

“The testimony of victims and their families brings into agonizing focus the tragedy of… this protracted conflict since 2009,” said Zeid Ra’ad Al Hussein, the U.N. High Commissioner for Human Rights. “The family that lost a breadwinner, forcing the children to leave school and struggle to make ends meet; the driver who lost his limbs, depriving him of his livelihood; the man who went to the bazaar to shop for his children only to return home to find them dead.”

The report comes after the deadliest attack for 15 years in Kabul on Saturday killed 80 people and left hundreds maimed, an assault claimed by I.S. The twin bombings tore through crowds of minority Shia Hazaras as they gathered to demand that a multimillion-dollar power line pass through their electricity-starved province of Bamiyan, one of the most deprived areas of Afghanistan.

Those figures are not included in the U.N. report.

But the assault illustrates the report’s finding that suicide bombings and complex attacks are now hurting more civilians than roadside bombs. “Parties to the conflict must cease the deliberate targeting of civilians and the use of heavy weaponry in civilian-populated areas,” Zeid said. “There must be an end to the prevailing impunity enjoyed by those responsible for civilian casualties—no matter who they are.”

The report said that growing airstrikes by Afghan forces also contributed to the rise in civilian casualties as new aircraft were deployed. It also voiced concern over the human rights violations of pro-government militia groups, which act outside the law in some Afghan provinces.