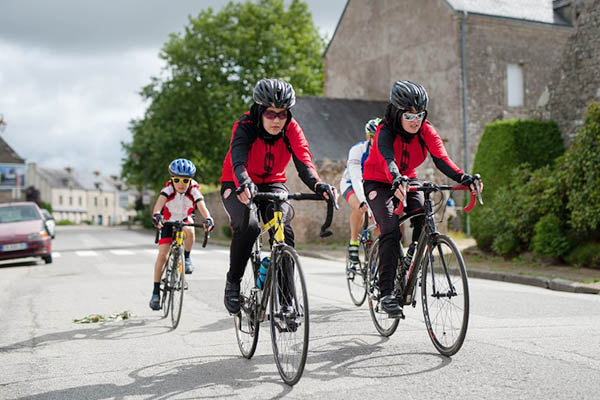 With discreet black scarves tucked beneath their helmets, Afghan refugees Zahra and Masomah Alizada hurtle down Brittany’s rural and winding roads…the sisters back on their bikes training after the Ramzan recess.

Zahra, 19 and Masomah, 20—known as the “Little Queens of Kabul”—are members of the Afghan national women’s cycling team. They fled a daily life of insults, threats and attacks to pursue a passion for cycling inherited from their father.

Two months ago they settled as refugees in the home of the Tour de France with their parents and three brothers. “In Afghanistan men think unsuitable for a woman to ride a bike, and the Taliban have banned us from sport,” says Masomah in accomplished English. “It’s very easy for men and women here to ride a bike.”

The Alizada sisters and their teammates were brave enough to ride a bike in public in a country where few women dare experiment, in particular, when one belongs to the minority Shia Hazara, a frequent target of kidnappings and attacks. At the center of it all are peltings with tomatoes and stones, submission to forced marriages and torrents of insults on social media.

“I have never given up on the bike, but I want to encourage girls to do it, and women’s cycling is becoming commonplace in Afghanistan,” says Masomah.

The sisters tried taekwondo, volleyball and basketball but finally chose cycling. “On the bike, you have a sense of freedom,” confides the younger woman. “No one tells us what we can or cannot do, because you are a woman. It’s extraordinary, you feel like a bird.”

Their father has never given in to pressure. He even says “wanting to be a good example for other parents” by “showing that men and women have the same rights.”

Exiled in Iran during the Taliban regime, the Alizada family had over 20 asylum applications rejected. Their French adventure is a curious sequence of life events, which led to the girls participating in a world championship qualifier in Albi, near Toulouse, last year. It’s also the story of an encounter with cycling enthusiasts the Communal family, whose empathy was stirred after Franco-German TV channel Arte’s documentary about the sisters.

The Communals put them up in their rustic holiday home, and then created a foundation to raise funds. In the village, solidarity spread.

Six retired teachers took turns to give French classes and the neighbors rallied round with gifts of local vegetables or simply placing a bouquet of roses on the windowsill. “It’s a lot of responsibility for us,” says the Communals’ son Thierry. “The goal is to mix bikes and studies, you have to enroll them in university, but you also have to integrate the parents,” he explains.

In June an asylum application was filed for the entire family. Confident in the “Little Queens’” potential, the civil engineering professor admits to having been “pleasantly surprised” by their ability last year in Albi. He intends to register them in a club so that they can train “two or three hours a day.”

“Today no one can say what their real level is until they have enjoyed a full year of training,” says Communal, explaining that in Afghanistan they only trained “once a week outside.”

In the land of ‘La Grande Boucle,’ (the Tour de France is known as the Big Loop) Mosamah and Zahra yearn to follow a stage of the Tour but ultimately, they aim for a spot at the Olympic Games in Tokyo in 2020, and why not “a first medal for Afghan women’s sport.”