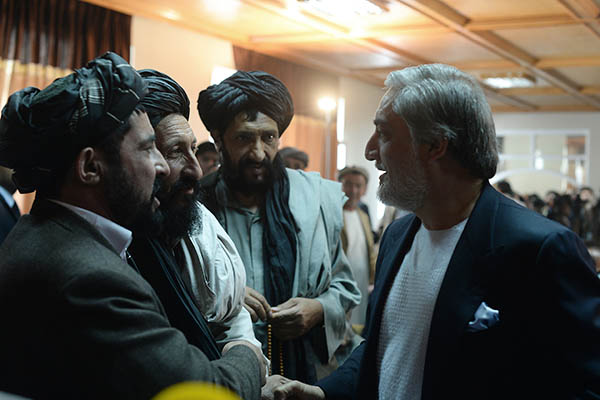 Abdullah Abdullah and Ashraf Ghani are likely to compete in head-to-head vote in June.

The two leading candidates in Afghanistan’s presidential election raised allegations of ballot fraud on Sunday, setting the stage for a difficult second-round vote likely to be targeted by Taliban attacks.

Former foreign minister Abdullah Abdullah and ex-World Bank economist Ashraf Ghani will compete in a head-to-head vote after results from the April 5 election showed neither gained the 50 percent needed for first-round victory.

The eventual winner will lead Afghanistan into a new era as U.S.-led NATO combat troops end their 13-year war against the Islamist insurgency that erupted after President Hamid Karzai took power in 2001.

“With the evidence we have, the victory of our team is evident and clear,” Abdullah said, adding that he would have won the first round decisively if the election had been clean. “We said from the beginning that fraud is our only rival, and we still hope that the complaints we have delivered will be addressed in a transparent way. There were fraud violations—organized, systematic fraud.” Abdullah also accused the government of “meddling” in the vote.

The 2009 election, when Karzai retained power after defeating Abdullah, was marred by massive fraud in a chaotic process that shook the multinational effort to develop the country after the ousting of the austere Taliban regime. Preliminary results released on Saturday showed Abdullah secured 44.9 percent of the first-round vote, with Ghani on 31.5 percent.

The final result is due to be announced on May 14 after a period for adjudication of hundreds of fraud complaints—followed by a run-off tentatively scheduled for June 7. Another expensive, and potentially violent, election could be avoided by negotiations in the coming weeks, but both sides have dismissed talk of a power-sharing deal.

Ghani sounded a defiant note despite finishing 13 percentage points behind Abdullah. “After inspection of fraud, the distance between the two top candidates will lessen,” he said. “A second round is a must according to the constitution. Any doubts will threaten the stability of Afghanistan. If the polls are transparent, I will be the first to congratulate the winner, and we expect the same from them, because we will be the winner,” Ghani added. “We will go for principles, not deals. The people’s votes tell me not to strike any deals with anyone behind the curtains.”

The United Nations mission in Afghanistan welcomed the results, but warned election officials that they must address all fraud complaints “in a professional, expeditious and open manner.”

Eight men ran in the election three weeks ago, with polling day hailed as a success by Afghan officials and foreign allies. Turnout was far better than in 2009 and the Taliban failed to launch a major attack despite threats to disrupt the vote.

A run-off in June—at the height of the traditional “fighting season”—could be more problematic for Afghanistan’s stretched security forces.

Karzai, who is constitutionally barred from a third term in office, stayed publicly neutral in the election. But he was widely thought to have lent some support to his loyal former foreign minister Zalmai Rassoul, who took just 11 percent of the vote. Rassoul could still play a key role in power-broking before the next president is chosen, as could former Islamist warlord Abdul Rab Rasoul Sayyaf, who collected seven percent.

Abdullah, a pro-U.S. politician who came second in the 2009 election, was a close adviser to the late Ahmad Shah Massoud, a revered Tajik ethnic leader who fought the Taliban during their 1996-2001 rule.

Ghani is a renowned intellectual who energized the campaign with his fiery speeches and is more favored by the larger Pashtun ethnic group.

Both candidates have pledged to explore peace talks with the Taliban and sign a deal with Washington that could allow 10,000 U.S. troops to stay on after this year on a training and counter-terrorism mission.

Nearly seven million people voted out of an estimated electorate of 13.5 million. Of those who voted, 36 percent were female—a figure seen as a sign of some improvement in women’s status in society.