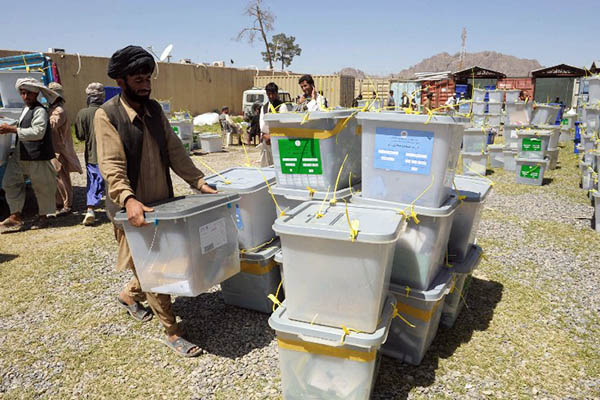 The election to choose a successor to Afghan President Hamid Karzai appeared “less fraudulent” than the scandal-tainted 2009 vote, poll officials said Monday, despite complaints being made against all the candidates.

More than seven million people defied bad weather and Taliban threats of violence to vote in Saturday’s first round of the election, earning praise from world leaders. Ahead of the vote there were fears that a repeat of the massive fraud that blighted Karzai’s re-election in 2009 would undermine the winner’s legitimacy at a testing time for the war-torn country.

There were no large-scale attacks on polling day, but a roadside bomb on Monday killed 13 civilians in southern Afghanistan, underlining the continuing unrest that the incoming president will have to tackle as NATO troops pull out.

Election Complaints Commission (ECC) chief Abdul Satar Saadat said that despite 122 fraud-related complaints against presidential candidates, the 2014 vote was better than its predecessor. “We believe this election has been less fraudulent compared to the previous one,” he said. “It is still too soon to say how serious the complaints are, but there have been complaints about all eight candidates.”

The ECC has received a total of around 1,400 complaints about Saturday’s vote, but not all were supported by evidence. Saadat said the majority of complaints were about shortages of ballot papers—a problem that became clear on polling day, as some voters went from station to station in a fruitless attempt to cast ballots.

The campaign team of Abdullah Abdullah, who came second in 2009, has also complained of ballot stuffing and threats to voters and observers. Abdullah and the other two leading hopefuls, Ashraf Ghani and Zalmai Rassoul, have all voiced concerns about fraud.

But Ghani and Rassoul have both pledged to respect the ECC’s rulings on complaints in what could be an encouraging sign for the stability of the process. There were fears that a disputed result could spark bitterness and recrimination and put the new president in a weak position.

Whoever emerges victorious from the lengthy vote-counting and appeals process faces the prospect of fighting the Taliban without the help of U.S.-led combat troops who will leave by December.

The roadside bomb on Monday in the volatile district of Maiwand in Kandahar province killed 13 civilians traveling in a pick-up truck. Roadside bombs are a common weapon used by the Taliban, though attacks that kill civilians often go unclaimed and there was no immediate claim of responsibility from the insurgents.

Vote counting began on Monday but preliminary results are not expected until April 24. If no candidate secures more than 50 percent of the vote, a runoff is planned for late May.

The European Union’s chief election observer in Afghanistan Thijs Berman congratulated Afghans for turning out to vote in “unexpectedly high numbers.” He blamed the shortages of voting slips on the lack of a proper electoral roll.

“In the absence of a comprehensive and updated voter list it was virtually impossible for the Independent Election Commission (IEC) to plan the distribution of polling stations and ballot papers,” he said.

The Taliban released a statement claiming it had carried out more than 1,000 attacks on election day. “Pro-western analysts and the officials of the stooge regime called it a successful, Afghan-inclusive and unparalleled [election],” it said. “But in reality the elections were held in very limited areas and even there, they were overshadowed by wide ranging fraudulence, mismanagement and [a] public boycott.”