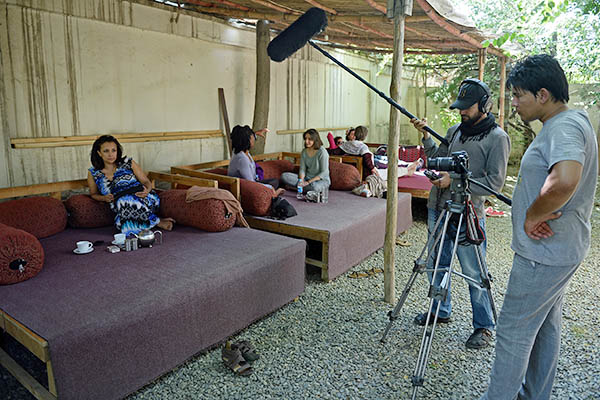 Judges on TV talent shows always attract controversy for making or breaking the careers of desperate wannabes—but for Aryana Sayeed, the job is also a fight for Afghanistan’s future.

The glamorous 28-year-old singer is a judge on worldwide hit series The Voice that launched in Kabul in May, immediately attracting huge audiences and an array of angry critics.

As a symbol of female independence in a strictly conservative Islamic country, Aryana receives regular death threats and lives in fear of being kidnapped by religious extremists.

On the set outside Kabul where the show is filmed for private channel Tolo TV, armed guards outnumber contestants and have machine guns held at the ready.

“I’m here to make a difference for women,” Aryana says. “I want women to have rights, to talk freely, to walk freely, to be able to go shopping when they wish. I’m not saying that they have to take their clothes off, or even remove their headscarves. Freedom is being able to live as a human being.”

As contestants belt out songs that could propel them to stardom, Aryana nods encouragingly and sways gently—acutely aware that her every move is studied across the country.

“I have to be so careful as they’re constantly checking what you are doing, what you are saying, even how you laugh,” she said. “I said ‘I love you’ to one contestant because he was so good. He was 15-years-old. Even that caused trouble. People asked ‘What did she say? This is not something normal in Afghanistan’.”

Aryana was born in Afghanistan before moving to Pakistan as a child and then to Europe. She now divides her time between Kabul and London.

As one of Afghanistan’s biggest stars, she has taken a stance against Islamic clerics who insist that women should remain at home and never earn a living of their own. In one of her songs, Aryana sings: “Because I am a woman, I am a slave” against a background of images of women in burqas.

“Women have no rights whatsoever here, so I want to be an example as somebody who is constantly fighting,” she said, admitting that her beliefs mean that security concerns dominate her life. “I have a lot of trouble online, receiving messages from people telling me that they will kill me or that they’ll put acid in my face. They tell me to stop singing. Kidnapping is something to keep in mind all the time. You’d rather die than be kidnapped. I don’t get out a lot.”

One young Afghan actress, Benafsha, was stabbed to death last year, and some religious hardliners recently declared a jihad against popular reality shows based on Western hits such as The X-Factor and Pop Idol.

One lawmaker calling for the programs to be banned branded them “blasphemous and vulgar.”

“Islam cannot accept girls and women who become singers, dancers or film actresses,” said Enayatullah Baleegh, a leading cleric in Pul-e-Khishti mosque in central Kabul. “Our culture and traditions do not allow it. I prefer a woman to wear fabric that covers her body with only her eyes and hands visible. If girls and women choose this life (of singing and acting), it will degrade their dignity.”

Actress Fereshta Kazemi, who was born in Kabul but grew up in the United States and returned to Afghanistan only last year, accepts that her profession is often equated with sexual availability.

“Actresses are considered by some to be prostitutes,” said the 33-year-old. “My private life outside work is not respected. I get crazy phone calls from people because they think I am available. After many months here, it has become very difficult. I feel that I’m being objectified and not human, because I’m choosing a job that is about putting myself out there.”

For sociologist Barayalai Fetrat, a lecturer at Kabul University, the challenges that Aryana and Fereshta face exemplify how Islamic conservatives are pushing to regain ground since the fall of the Taliban in 2001 particularly with NATO troops due to leave in 2014.

“As foreign troops pull back, traditionalists who have been largely silent for the past decade—and who still have strong backing in society—are reappearing to attack the gains that Afghan women have achieved,” he said. “They are now boldly attacking the rights of women to work in offices, to become artists, or even the right to education. The women who have been pioneers in the fight for their rights are now facing more and more pressure and are fearful for their future. Artists like Aryana and Fereshta are the primary targets.”

But Fereshta does find some reasons to stay optimistic despite the gloomy outlook and mounting challenges.

After her performance in recently released film The Icy Sun, which tackles the taboo subject of rape, she said she was surrounded by admiring fans. “There were all these girls who came to kiss me. They were happy, because I had made a film that speaks honestly about the situation of women.”

Is it the only way forward for a war raged country. Getting this country out of religious extremism, it is being dragged to social extremism. Is there no way that we can have a balanced flourishing society. From shuttle-cork burqas to sleeveless minies can never bring any tolerance in society but will increase extremism.