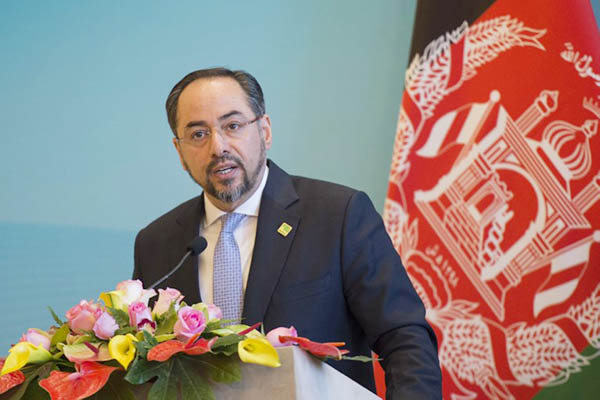 Afghanistan’s top diplomat has pulled out of a high-level U.N. meeting about his country to help end a growing political crisis that is testing the authority of Afghan President Ashraf Ghani, sources told AFP on Thursday.

The eleventh-hour decision by Salahuddin Rabbani not to travel to New York comes as his Jamiat-e-Islami party holds talks with Ghani’s office to resolve a dispute, involving a powerful governor in the northern province of Balkh who is refusing to stand down, which has caused concern in Washington.

In a crisis that many fear could turn violent, one of Jamiat’s top leaders Atta Mohammad Noor, has refused to leave the post he has held since 2004, rejecting a claim by Ghani’s office that he had resigned.

Tajik-dominated Jamiat’s negotiating team “has decided that the presence of Salahuddin Rabbani, as head of the party and chief negotiator, is important at this key stage of the talks,” said Kamaluddin Hamid, a senior Jamiat member. “Unless there is a last minute delay [in the talks] or change of decision, he will stay in Afghanistan and not go to this New York meeting [on Friday] for the sake of national interest. The aim is to calm the tension and solve the situation peacefully.”

An Afghan government official confirmed that Rabbani would not attend the special meeting on Afghanistan “due to the continuation of negotiations.”

Rabbani’s decision not to attend Friday’s Security Council meeting comes days after the U.N. group, including U.S. Ambassador Nikki Haley, visited Kabul for a close-up view of the security and political situation in the country.

The Balkh crisis was also on the agenda during a phone call between Vice President Mike Pence and Ghani on Tuesday. “The vice president emphasized his support for the Afghan government to engage with Balkh Governor Atta and conduct a peacefully negotiated transition of leadership,” said a readout of the call released by the White House.

The tussle with Noor comes at a bad time for Ghani, an ethnic Pashtun, whose U.S.-backed government faces deteriorating security as well as growing pressure to hold long-delayed parliamentary elections this year.

An Afghan diplomat said the negotiations, which have been going on for several weeks, were “deadlocked.”

“For that reason Rabbani prefers to remain here… but this is a lack of respect for the Security Council,” he told AFP on the condition of anonymity. “Ghani may fire Rabbani.”

For weeks Noor has made almost daily speeches to hundreds of supporters that have been broadcast live on television, highlighting the intense interest in the stand-off between the strongman and the president.