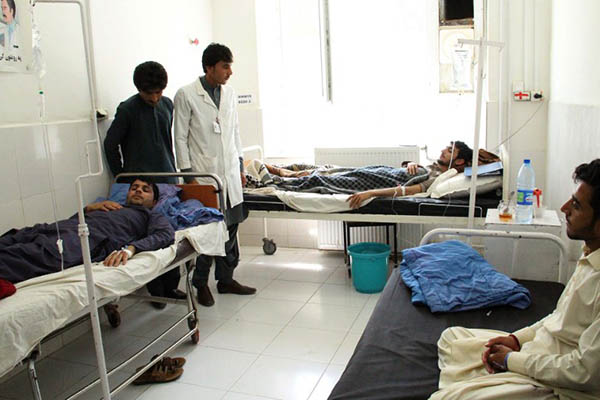 Several hunger strikers taking part in a rare sit-in peace protest in Afghanistan’s restive south have been taken to hospital for treatment, officials and protesters said on Saturday.

The weeklong demonstration in Lashkar Gah, which has involved up to several dozen men, women and children, began the day after a car bomb attack rocked the city on March 23, killing at least 13 people and wounding dozens more. Some of the protesters began a hunger strike on Thursday after their demands for a ceasefire between Afghan security forces and the Taliban were not met.

While the sit-in continued, organizers said they had called off the hunger strike on Saturday after the intervention of religious leaders. “Tens of Afghan ulemas came to our protest camp. We have ended our hunger strike conditionally, and we asked the ulema to support or back us in the peace talks,” Iqbal Khaibar, one of the protest organizers told AFP. He said the religious leaders had assured demonstrators that there would be peace talks with the Taliban.

Four hunger strikers were taken to hospital for treatment on Friday night, including two who were “in a terrible condition,” Helmand provincial public health director Aminullah Abed told AFP.

Two men wearing oxygen masks and hooked up to saline drips were seen lying in their hospital beds when an AFP photographer visited on Saturday. “I was unconscious when I was brought to the hospital, otherwise I didn’t want this saline drip,” Qais Hashemi, 27, said. “If they save my life today, tomorrow I will die in a suicide attack.”

At the sit-in protest men and children held signs reading “Without peace it is impossible to live.” The protesters, including civil society activists and relatives of victims killed in violence, had planned to march more than 100 kilometers to Taliban strongholds in the province and try to convince the militants to stop fighting. But the Taliban had told them to take their protest to U.S. military bases—and warned it would not be responsible for their safety.

“Demand that they put an end to the ongoing war and occupation,” the Taliban said in a WhatsApp message to journalists. “If something were to happen then responsibility will be placed squarely on your shoulders because you understand that we are at war.”

The withdrawal of U.S.-led NATO combat troops at the end of 2014 enabled the Taliban to regain control of opium poppy-rich Helmand, which has been the scene of some of the fiercest fighting of the 16-year war. Much of it remains controlled or contested by the militants.

The sit-in protest comes amid growing calls for the Taliban to take up President Ashraf Ghani’s offer last month of peace talks. His proposal received renewed international support at a conference in the Uzbek capital Tashkent on Tuesday. So far the Taliban have not directly responded to the offer.