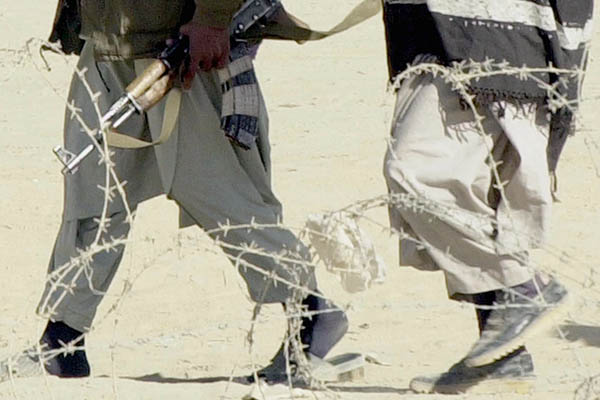 Army officials in Afghanistan and Pakistan blame each other for the firing that resulted in one casualty.

An Afghan police officer was killed early on Thursday during an exchange of fire on the border between Pakistan and Afghanistan, according to Afghan officials.

Kandahar police chief, Ahmed Zia Durrani, confirmed that a policeman had been killed. “At least one border police official was killed,” he said.

Afghan officials, speaking on condition of anonymity, alleged that military personnel from Pakistan had entered Afghanistan and indiscriminately started shooting at local personnel in the Maruf district of Kandahar province. They claimed the Pakistani troops were attempting to build a checkpost inside Afghanistan. Pakistani officials have denied this.

“No construction is being undertaken by Pakistani troops inside Afghan territory,” military officials told Newsweek on condition of anonymity. Instead, they said, the Afghan Army had opened fire on a Pakistani checkpost. “Afghan National Army troops resorted to unprovoked firing on a Pakistani post in the Loi Bund area near Qila Saifullah,” they said, adding: “Pakistani troops responded to the Afghan Army troops’ firing.” The Loi Bund region lies along the border between Qila Saifullah in Balochistan and Maruf district in Afghanistan’s Kandahar province.

Another security official based in Balochistan province near the border with Afghanistan confirmed the incident. “Some contractors were installing barbed wire inside Pakistani territory along the Pak-Afghan border when they came under attack from the other side,” he said. He said the Pakistan Army had merely retaliated.