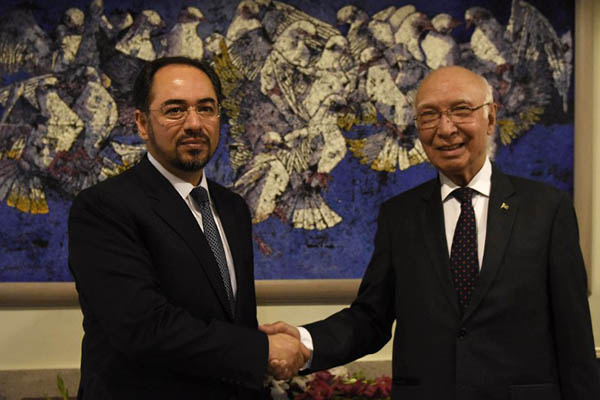 Afghan officials met with their counterparts in Islamabad on Thursday to discuss the revival of suspended talks with the Taliban, which stalled following the announcement of the group’s founder Mullah Omar’s death last month.

Splits have emerged among the militants following the appointment of Mullah Akhtar Mansoor, with some top leaders including Omar’s son and brother refusing to pledge their allegiance.

The arrival of the delegation also comes at a spike in tensions between Kabul and Islamabad after Afghan President Ashraf Ghani accused Pakistan this week of sending “messages of war” and harboring bomb-making camps following a series of deadly attacks in Kabul.

“There has been a spike in violence inside Afghanistan after postponement of the talks but we hope that the visit of the Afghan delegation would help remove misunderstandings between the two countries.”

The first face-to-face talks aimed at ending the 14-year insurgency took place last month between the Afghan government and the Taliban in Murree. But the Taliban distanced themselves from a second round of talks scheduled for the end of July, after the announcement of Omar’s death.

The delegation’s visit comes at a low point for Afghan-Pakistan relations after President Ghani, who has actively courted Pakistan since coming to power last year, slammed his eastern neighbor for failing to rein in the Taliban. Pakistan historically backed the Taliban regime during their time in power in Afghanistan and some observers believe it continues to support their insurgency even today.