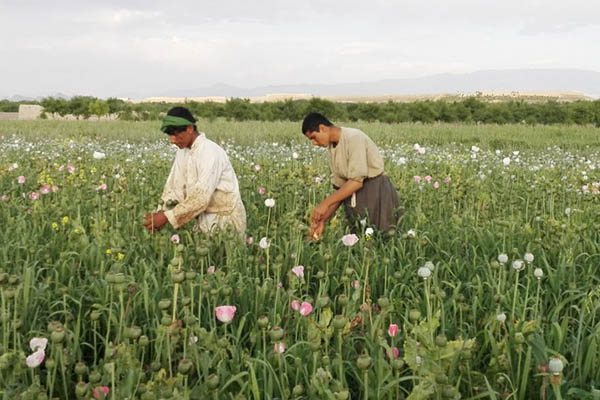 Afghanistan saw a 10 percent jump in opium cultivation this year because of bumper harvests, collapsing eradication efforts due to growing insecurity and declining international aid to combat drugs, the U.N. said on Sunday.

Cultivation dropped last year due to drought but it has been on the rise in the past decade, fueling the Taliban insurgency and spurring a growing crisis of drug addiction despite costly U.S.-led counter-narcotics programs.

High levels of cultivation this year meant the estimated opium production soared 43 percent to 4,800 tons, a U.N. Office on Drugs and Crime (UNODC) report said, underscoring a “worrying reversal” in efforts to combat the scourge of drugs.

“The cultivation has increased by 10 percent this year compared to the same time in 2015—from 183,000 hectares to 201,000 hectares,” counter-narcotics minister Salamat Azimi told reporters while releasing the U.N. report.

The statistics represent the third-highest level of cultivation in Afghanistan in more than two decades—after a record high in 2014 and 2013.

Officials cited favorable weather, rising insecurity and falling international donor support as the main reasons for the increase in cultivation in Afghanistan, the world’s leading producer of opium. Ninety-three percent of the cultivation took place in the southern, western and eastern parts of the country, the report said.

“I believe with the existing equipment, facilities and civilian task force, we cannot fight the cultivation of poppy in insecure areas,” said Baz Mohammad Ahmadi, deputy minister of interior for counter-narcotics. “The challenges of deteriorating security in different parts of the country took away the opportunities to destroy poppy farms.”

Eradication efforts appeared to have collapsed. A total of 355 hectares of poppy eradication was carried out this year, a 91 percent plunge from 2015. “In 2016, farmers’ resistance against poppy eradication operations was occasionally expressed through direct attacks on eradication teams,” the U.N. report said. “No eradication took place in the provinces with high levels of opium poppy cultivation due to the extremely poor security situation in those areas and logistical/financial challenges to organize the eradication teams on time.”

Afghanistan saw a drop in opium cultivation last year for the first time since 2009, a U.N. report said, citing drought as a key reason for the decline. But that was seen as a temporary blip.

International donors have splurged billions of dollars on counter-narcotics efforts in Afghanistan over the past decade, including efforts to encourage farmers to switch to other cash crops such as saffron. But those efforts have shown little results.

Addiction levels have also risen sharply—from almost nothing under the 1996-2001 Taliban regime—giving rise to a new generation of addicts since the 2001 U.S.-led invasion of Afghanistan. “We explain to the international community that now is the time to increase support for counter-narcotics in Afghanistan,” said UNODC regional chief Andrey Avetisyan.

The challenges of deteriorating security in different parts of the country took away the opportunities to destroy poppy farms.