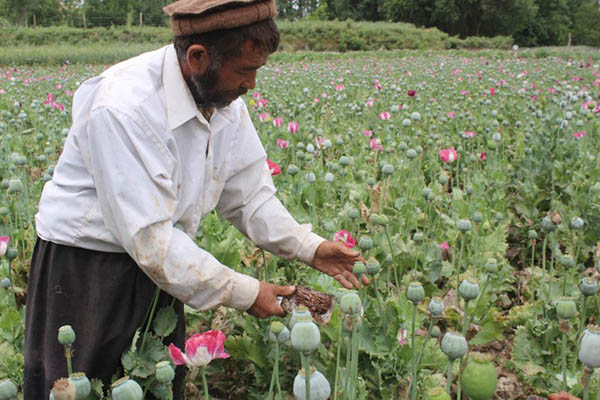 Afghan opium producers have had a bumper year with output soaring 87 percent as the area under poppy cultivation hit a record high, the latest annual survey said on Wednesday.

The price of opium as it left farms in war-torn Afghanistan this year soared by 55 percent to almost $1.4 billion, the U.N. Office on Drugs and Crime (UNODC) said, helping to fuel the bloody insurgency.

Rising insecurity, lack of government control and corruption were among the key drivers along with unemployment and lack of education, according to the Afghanistan Opium Survey, jointly compiled by the UNODC and Afghanistan’s counter-narcotics ministry.

Potential opium production from this year’s harvest is estimated at 9,000 tons, up 87 percent from the 4,800 tons produced last year, boosted by increased cultivation and better yields. Over the same period the area under poppy cultivation expanded by 63 percent to a record 328,000 hectares—topping the previous record of 224,000 hectares in 2014—with the number of poppy-growing provinces jumping to 24.

“The significant levels of opium poppy cultivation and illicit trafficking of opiates will probably further fuel instability, insurgency and increase funding to terrorist groups in Afghanistan,” the report warned. “More high quality, low cost heroin will reach consumer markets across the world, with increased consumption and related harms as a likely consequence.”

Strong increases in cultivation were recorded in almost all major poppy producing provinces, with restive Helmand in the south seeing the biggest rise of 79 percent. Around 60 percent of the opium poppy cultivation took place in the southern provinces where the Taliban has a strong presence and virtually no eradication took place.

Poppy eradication nearly doubled to 750 hectares in 14 provinces, compared with 355 hectares in seven provinces the previous year. Yet those efforts were dwarfed by the sheer increase in cultivation.

International donors have spent billions of dollars on counter-narcotics efforts in Afghanistan over the past decade, including efforts to encourage farmers to switch to other cash crops such as saffron. But those efforts have shown little results.

Addiction levels have also risen sharply—from almost nothing under the 1996-2001 Taliban regime—giving rise to a new generation of addicts since the 2001 U.S.-led invasion of Afghanistan.