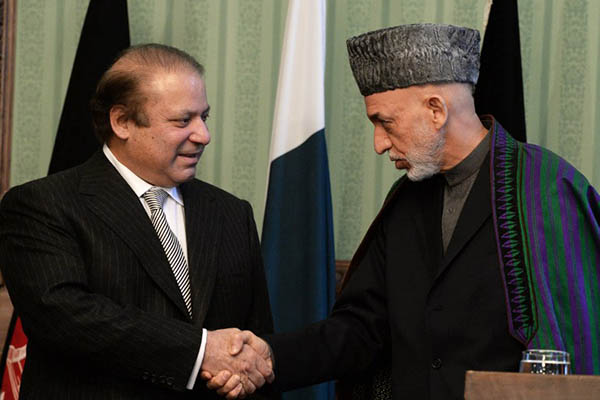 Afghan and Pakistani leaders are expected to discuss security in Afghanistan after the NATO troop pullout and efforts to negotiate with the Taliban when they meet in Turkey on Thursday.

Turkish President Abdullah Gul hosted Afghan President Hamid Karzai and Prime Minister Nawaz Sharif over dinner late Wednesday, on the eve of the summit opening. It is the eighth in Turkey since a regular consultation mechanism was established in 2007 to encourage the neighbors to cooperate in the fight against extremist groups. The talks will primarily focus on ways to restore peace and promote reconciliation in Afghanistan, according to a senior Pakistani official.

Sharif emphasized ahead of the summit the need for peace and stability in its neighbor as U.S.-led troops prepare to withdraw. “Peace and stability in Afghanistan has a direct bearing on Pakistan. We support a sovereign, independent and united Afghanistan. The drawdown of NATO/ISAF by the end of the year as part of the security transition, will be a watershed event,” he told Turkey’s Hurriyet Daily News. “We hope the drawdown will be managed while preserving regional peace and security. Pakistan also wishes Afghanistan every success in drawing a path for sustainable peace and development,” he said.

Karzai has long accused Pakistan of sheltering Taliban militants waging the insurgency against his government. Last month, Kabul reignited traditional cross-border suspicions by suggesting that Islamabad’s spy agency was behind an attack on a Lebanese restaurant in the Afghan capital in which 21 people, including 13 foreigners, were killed. Taliban insurgents claimed responsibility for the Jan. 17 suicide assault, which was the deadliest attack on foreign civilians since the Taliban were ousted in 2001.

Intelligence officials and high-level military officials from the two countries were expected to hold closed-door talks on the sidelines of the Ankara meeting, the theme of which is “sustainable peace in the heart of Asia.”

Karzai, who is due to step down after presidential elections on April 5, is pushing for Pakistan to help start peace talks with the Taliban. He has demanded progress on talks before Afghanistan signs a security deal with the U.S. that would allow about 10,000 troops to stay in the country after this year.

The supporters of the pact, known as the Bilateral Security Agreement, say it is crucial to Afghanistan’s stability after the drawdown of NATO forces by Dec. 31, 2014. “This agreement is also significant for other NATO allies,” a Turkish official said. “It is hard for other countries to deploy troops in Afghanistan, without the presence of American troops.”

On Thursday, Afghanistan released 65 alleged Taliban fighters from jail despite condemnation from the U.S., which says the men could return to the battlefield to launch strikes against NATO and Afghanistan forces. The release of detainees from Bagram prison is set to worsen the increasingly bitter relationship between Kabul and Washington ahead of the withdrawal of U.S.-led troops.

Pakistan is seen as crucial to peace in Afghanistan, as it was a key backer of the hardline 1996-2001 Taliban regime in Kabul. Since the election of Sharif last year, Pakistan has tried to build ties with Afghanistan.

“Pakistan has extended consistent support for peace and reconciliation in Afghanistan,” said a Pakistani embassy spokesman in Ankara. “It remains committed to working with Afghanistan as well as the international community for sustainable peace, stability and development in Afghanistan,” he said.

The trilateral summit would “carry forward the process of constructive engagement and leadership exchanges on the evolving situation as well as matters of common interest.”

how possibly there can be peace in Afghanistan or PAKISTAN as long AS the AMERICAN TROOPS ARE IN AFGHANISTAN, AND ARE BUILDING MOST IMPREGNABLE LARGEST MODERN MILITARY BASES. THESE MILITARY BASES WILL BE CEASELESS REMINDERS TO THE AFGHAN PEOPLE THAT THEIR LAND IS STILL AN OCCUPIED COUNTRY BY THE USA. AND ITS LACKEYS.