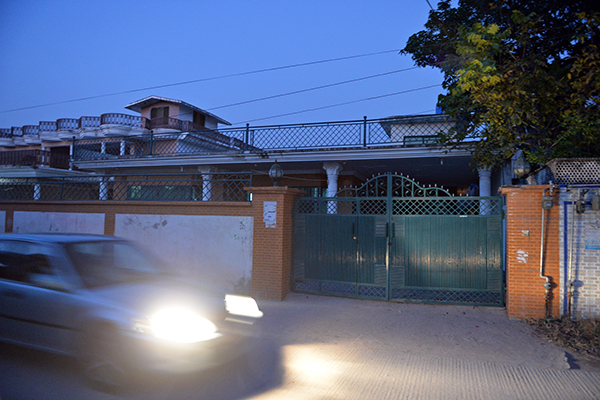 A house near Islamabad believed to be Nasiruddin Haqqani’s. Aamir Qureshi—AFP

Militants say Nasiruddin Haqqani’s death will not affect their jihad.

The Taliban on both sides of the Pakistan-Afghanistan border have warned of retaliation after the killing of Nasiruddin Haqqani near Islamabad on Sunday.

On Tuesday, the Afghan Taliban condemned the killing and said Haqqani’s death would not have any impact on their campaign of violence. “We condemn the cowardly act of the defeated enemy and tell them that these kinds of terrorist actions will not have any negative impact on jihadist activities,” the Taliban said in a statement. “His death is a big loss for the Islamic Emirate and all of Afghanistan.”

Nasiruddin Haqqani was the eldest son of Haqqani network founder, Jalaluddin Haqqani. He was shot and killed by unidentified gunmen astride motorcycles outside a bakery in Bhara Kahu near Islamabad on Sunday evening. No one has claimed responsibility for his killing, which the Pakistani Taliban blame on Pakistani security agencies.

“Pakistan’s security and intelligence agencies are behind the killing of Nasiruddin Haqqani,” said Tehreek-e-Taliban spokesman Shahidullah Shahid. “His killing was a result of the bargain between the U.S. and Pakistan. They decided the U.S. would kill [Pakistani Taliban chief] Hakimullah Mehsud and they would themselves kill Nasiruddin.” Shahid said his group will avenge both Mehsud’s and Haqqani’s killings.

The U.S. has long accused the militant Haqqani network of being a “veritable arm” of Pakistan military’s Inter-Services Intelligence directorate. The group, believed to be based in Pakistan’s North Waziristan tribal agency, is affiliated with the Afghan Taliban and has led attacks on U.S. and NATO forces inside Afghanistan—including the 2011 siege of the U.S. Embassy. Nasiruddin Haqqani is believed to have been the network’s chief fundraiser.

Dangerous, an utterly dangerous situation as “our friends” are turning against ourselves.