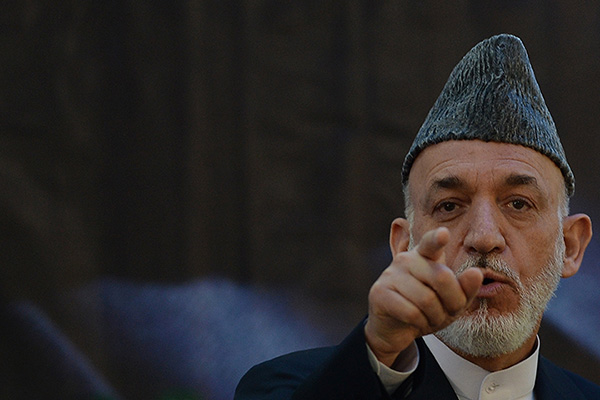 Afghan President Hamid Karzai mulling response to U.S. efforts to repair damaged ties after a public spat over the Taliban opening an office in Qatar.

As Afghanistan angrily condemned the “theatrical” opening of the Taliban mission during a meeting of the U.N. Security Council, the U.S. reiterated comments that the office must not be treated as an embassy. The State Department also said it was not ruling out discussions with the Taliban on a prisoner swap as it works to bring home a U.S. soldier held captive by the militants for almost four years.

Karzai and U.S. Secretary of State John Kerry spoke twice by telephone after the Afghan government became enraged that the office was opened in a blaze of publicity and U.S. officials were apparently about to arrive for talks.

The office used the formal name “Islamic Emirate Of Afghanistan” from the rebels’ 1996-2001 government, while a Taliban spokesman at the opening press conference declined to say they supported the peace process.

“John Kerry assured that the Qatari government has removed the ‘Islamic Emirate of Afghanistan’ sign from the Taliban office and the office is for peace talks only,” a statement from Karzai’s office said late Wednesday. Karzai also told Kerry that Afghan public opinion was “extremely negative” over the way in which the Taliban office had been unveiled in an event that many experts described as an international publicity coup for the insurgents.

“The opening of this office has made the Taliban look strong, the Americans desperate, and President Karzai angry,” the Afghanistan Analysts Network said in a briefing note.

U.S. Deputy Ambassador Rosemary DiCarlo told a U.N. Security Council meeting on Afghanistan that the correct name for the office was the “Political Office of the Afghan Taliban.” “We have underscored that the office must not be treated as, or represent itself as, an embassy or other office representing the Afghan Taliban as an emirate, government, or sovereign,” the U.S. envoy said.

But Afghanistan’s U.N. envoy Zahir Tanin said the Qatar office opened in a “theatrical sequence of events” that contravened the principles set for the Taliban mission. “Raising the Taliban flag in Doha on Tuesday was just a reminder of a dark and bloody past from which our country still struggles to emerge,” he told the meeting.

“We have not made a decision to transfer any Taliban detainees from Guantanamo Bay, though we anticipate, as I’ve said, that the Taliban will all raise this issue,” she said, describing the release of U.S. soldier Bowe Bergdahl as a “priority.” Psaki stressed that no date or venue had yet been set for the direct U.S.-Taliban talks but special representative for Afghanistan and Pakistan, James Dobbins, who will lead the talks, was ready to go to the region.

NATO Secretary-General Anders Fogh Rasmussen said he hoped the talks could start “sooner rather than later.” “I think peace talks could reinforce security gains and further contribute to Afghanistan’s security,” he told a press conference in Brussels.

Karzai, the only leader of Afghanistan since the Taliban were toppled in the 2001 U.S.-led invasion, opposes bilateral U.S.-Taliban talks.

Neighboring Pakistan pledged to back a solution that would end the 12 years of violence in Afghanistan.

“We have welcomed this process and we believe that all factions in the Afghan conflict and all groups should join the process of dialogue,” foreign ministry spokesman Aizaz Chaudhry told reporters in Islamabad on Thursday. Support from Pakistan, which is accused of tacitly providing support for the Taliban, is seen as crucial for the chances of any peace deal emerging.

On Wednesday Karzai broke off ongoing Afghan-U.S. talks on an agreement that would allow Washington to maintain soldiers in Afghanistan after the NATO combat mission ends. In response to the talks suspension, U.S. President Barack Obama said he always expected “friction” at Afghan reconciliation talks but voiced hope that “despite those challenges the process will proceed.”

U.N. envoy to Afghanistan Jan Kubis told the Security Council meeting 1,061 civilians had been killed and 2,031 injured in attacks between Jan. 1 and June 6, a 24 percent increase on the same period in 2012.

About 100,000 foreign combat troops, 68,000 of them from the U.S., are due to withdraw by the end of next year, and NATO formally transferred responsibility for nationwide security to Afghan forces on Tuesday.