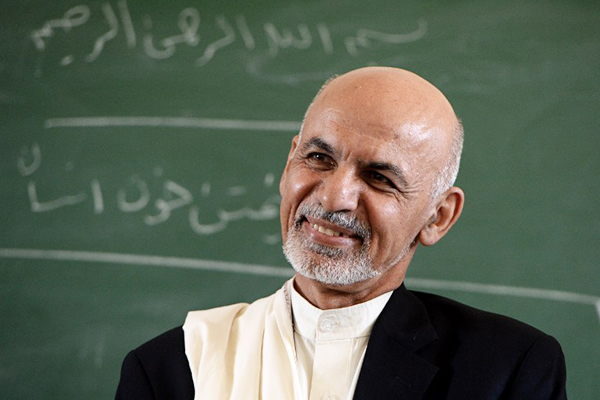 Heart of Asia conference in Islamabad to also include foreign ministers of China, Tajikistan, Kyrgyzstan and Iran.

Afghan President Ashraf Ghani is set to visit Pakistan this week for a regional conference in a high-level visit that boosts hopes for the revival of Taliban peace talks, officials confirmed Monday.

The Indian foreign minister will also attend the two-day Heart of Asia conference in Islamabad, the highest-level visit from Delhi in years, which comes amid hopes that Pakistan can mend relations with its neighbors.

A spokesman for Abdullah Abdullah, Afghanistan’s chief executive, said Monday that Ghani would attend the conference, set to be jointly inaugurated by him and Prime Minister Nawaz Sharif. Ghani’s last visit to Pakistan was in November 2014.

Indian foreign minister Sushma Swaraj will also attend, a ministry spokesman tweeted. The last visit by any top Indian diplomat was in September 2012 when S.M. Krishna, a former foreign minister, came to Islamabad.

Tensions have been unusually high between Islamabad, Delhi and Kabul, but Sharif held brief meetings with Ghani and Indian counterpart Narendra Modi in Paris last week that seem to have broken the ice. The meeting with Ghani, on the sidelines of a climate change conference in Paris, came amid Kabul’s accusations that Islamabad supported the Taliban most recently in Kunduz, briefly captured in September by militants as part of a nationwide surge in attacks.

Pakistan, which has historically supported the Afghan Taliban and wields considerable influence over the insurgents, hosted a milestone first round of peace negotiations in July. But the talks soon stalled when the Taliban belatedly confirmed the death of their longtime leader Mullah Omar.

Separately, doubts about a visit by Indian foreign minister Swaraj disappeared on Monday after her visit was confirmed by the Indian foreign ministry. The announcement came following talks between Indian and Pakistani national security advisers in Bangkok on Sunday on militancy and Kashmir, a joint statement said, as the two countries seek a thaw in frosty relations.

Diplomacy between the two nuclear-armed countries worsened significantly in 2014 following the election of Hindu nationalist Modi as prime minister in India, with shelling across their border in Kashmir claiming dozens of lives. India and Pakistan have been rivals since gaining independence from Britain in 1947 and have fought three wars against each other.

The conference will provide opportunity for Pakistan to further mend its relations with neighboring Afghanistan and India, observers said. Foreign ministers of China, Tajikistan, Kyrgyzstan and Iran have also confirmed their participation, according to Pakistan’s foreign ministry.