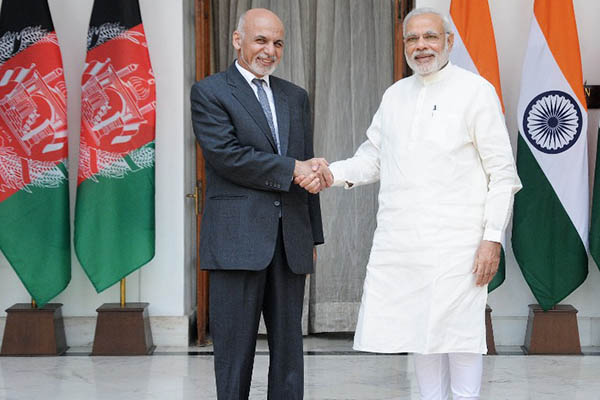 Ghani hopes to attract Indian investment to Afghanistan during his maiden trip to neighboring nation.

Afghan leader Ashraf Ghani on Tuesday sought to reassure his Indian counterpart Narendra Modi that Kabul was committed to its close relationship with New Delhi despite warming ties with Pakistan.

Afghanistan’s president arrived in India late Monday on a three-day trip designed to patch up relations with its neighbor, which have frayed since Ghani assumed office in September.

“India and Afghanistan have [a] million ties,” Ghani told reporters at a joint media briefing in the Indian capital following talks with Modi. “Afghanistan was a roundabout where ideas and goods flowed to Central and South Asia and our vision today is based on that potential,” he added.

Ghani reached out to India’s rivals Pakistan and China within months of his election as president, embarking on state visits to both countries before visiting India, causing concern in New Delhi. Afghanistan’s recent military and strategic engagement with Pakistan in its fight against Taliban militants was also seen as a major policy shift from the previous Hamid Karzai government, which accused Islamabad of destabilizing Kabul.

Ghan’s maiden visit to India as Afghan leader is also aimed at shoring up Indian investment—he will meet business organizations on Wednesday in a bid to attract private sector investment in his war-ravaged country.

India has invested over $2 billion in infrastructure projects and the social sector in the country in recent years but has stayed away from engaging militarily in the 13-year-long war.

New Delhi recently rejected a request to supply some military equipment but did deliver three unarmed helicopters this month. Modi said Tuesday that his country would also continue to provide capacity-building support for Afghan security forces. Modi said his government would continue to engage with Afghanistan, as the countries shared “a timeless link of human hearts.”

India has been trying to gain its foothold in the strategically important Afghanistan since U.S.-led forces ousted the Taliban in 2001, mainly to access trade and gas routes from Iran and grab a share of its post-war development. New Delhi plans to invest in Iran’s southern Chabahar port, a potential rival to the China-funded Gawadar port in Pakistan, and needs a tripartite agreement on a transit route to connect Iran via Afghanistan. Modi said he had “reaffirmed” his commitment to the project.