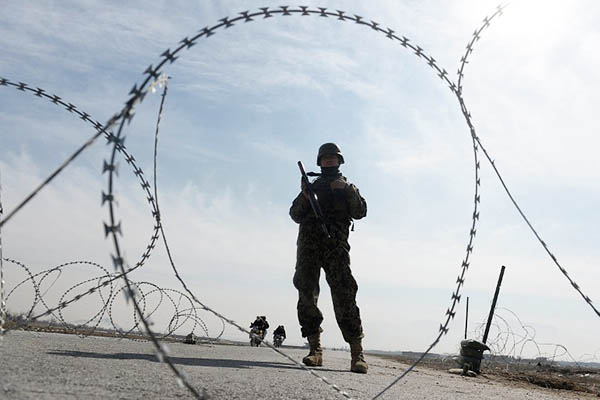 The attack in the eastern province of Ghazni was reminiscent of the last major Afghan jailbreak in 2011 when nearly 500 Taliban fighters inmates escaped from a prison in southern Kandahar province. The raid comes as the militants ramp up attacks on government and foreign targets despite being embroiled in a bitter leadership transition.

“Around 2:30 a.m. six Taliban insurgents wearing military uniforms attacked Ghazni prison. First they detonated a car bomb in front of the gate, fired an RPG and then raided the prison,” said deputy provincial governor Mohammad Ali Ahmadi. He added that 352 inmates escaped after the attack but the Afghan interior ministry said up to 400 managed to flee.

Ahmadi said four Afghan police officers were killed and seven others were wounded in the raid. Baz Mohammed Hemat, head of the civilian hospital in Ghazni city, said 14 wounded people—10 security forces, and four inmates—had been brought to the facility for treatment.

The Taliban claimed responsibility for the attack.

“This successful operation was carried out at 2:00 a.m. and continued for several hours. The jail was under Taliban control,” Taliban spokesman Zabihullah Mujahid said in a statement. “In this operation, 400 of our innocent countrymen were freed… and were taken to mujahideen-controlled areas,” it added.

The Taliban, who launched a countrywide summer offensive in late April, are known to exaggerate and distort their public statements.

In 2011, almost 500 Taliban fighters and commanders escaped from a prison in an audacious jailbreak in southern Kandahar province, in what the government said was a security “disaster.” The Taliban said they sprang the inmates from the Kandahar prison through a one-kilometer tunnel that took five months to dig, and claimed all those who escaped belonged to the militia, including more than 100 commanders.

Taliban insurgents are stepping up their summer offensive amid a simmering leadership succession dispute after the confirmation of longtime chief Mullah Omar’s death. Mullah Akhtar Mansoor, a trusted deputy of Omar, was named as the insurgents’ new chief in late July, but the power transition has been acrimonious.

Afghan security forces, stretched on multiple fronts, are facing their first fighting season without the full support of U.S.-led NATO forces. NATO ended its combat mission in Afghanistan last December and pulled out the bulk of its troops although a 13,000-strong residual force remains for training and counter-terrorism operations. Afghanistan’s president implored international donors earlier this month for their continued support, saying the “wounded country” faced a host of security and economic challenges.