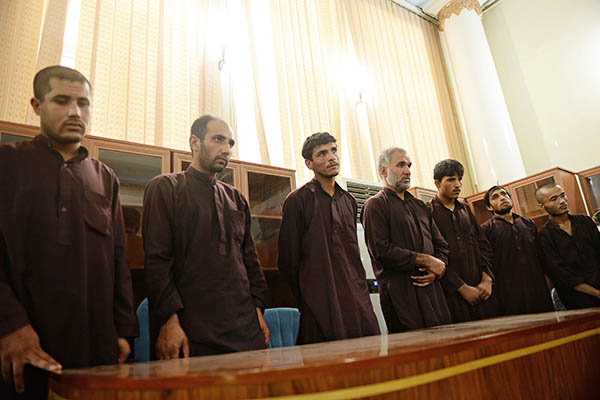 The seven men had dressed as police and robbed and gang-raped four women, provoking international outrage.

An Afghan judge on Sunday sentenced seven men to death for the gang rape of four women in a case that sparked nationwide outrage and highlighted the violence women face despite reforms since the Taliban era.

The seven men were found guilty of kidnapping and attacking the female members of a group that was driving home to Kabul from a wedding. President Hamid Karzai on Sunday had called for the men to be hanged. The death sentences were technically handed down for the crime of armed robbery rather than rape.

In a televised trial that lasted only a few hours, the court heard that the men, who had obtained police uniforms and were armed with guns, stopped a convoy of cars in the early hours of Aug. 23. They dragged the four women out of the vehicles, robbed them, beat them up and then raped them. One of the women was reported to be pregnant.

“We went to Paghman with our families. On the way back, they took us,” one victim, dressed in a burqa, told the packed courtroom as noisy protesters outside demanded the death penalty. “One of them put his gun to my head, the other one took all our jewelry, and the rest started what you already know,” she said.

Applause erupted inside the court after Kabul police chief Zahir Zahir called for the men to be hanged. “We want them to be hanged in public so that it will be a lesson for others,” he said. “We arrested them with police uniforms. They confessed to their crime within two hours of their arrest.”

The judge said the seven had the right to appeal against their sentences. Under Afghan law, the president must also sign a death warrant for an execution to go ahead.

Women’s rights have been central to the multi-billion-dollar international development effort in Afghanistan since the fall of the Taliban regime in 2001. Under the Taliban’s harsh version of shariah, women were forced to wear the burqa, banned from jobs, and forbidden even to leave the house without a male chaperone. Rape and violence against women and girls was rife, according to Amnesty International, which says that Afghan women are still routinely discriminated against, abused and persecuted.

The Taliban, who launched a resilient insurgency after being ousted, threaten a comeback as U.S.-led NATO combat troops withdraw from the country later this year. Despite 13 years of fighting, foreign forces have failed to quash the insurgents, who have gained ground in a series of recent offensives.

The gang rape unleashed a wave of public anger via street protests, the media and the Internet, echoing the response to recent similar crimes in India—including the fatal attack on a student on a bus in New Delhi in 2012 that provoked headlines worldwide.

Last week the U.S. embassy in Kabul condemned “the brutal robbery, beating, and rape” and called on Afghan authorities to bring the perpetrators to justice.

Hasina Safi, head of the Afghan Women’s Network action group, said she welcomed the death penalties. “We consider it a big step and achievement for the women of Afghanistan. I wish we had more such cases decided on openly, so that we didn’t have to suffer such heinous acts.”

But Human Rights Watch said Afghanistan’s justice system had failed to follow due process over the case and that all accused deserved a fair trial.

President Karzai’s personal intervention came as he waits to step down after ruling Afghanistan since the fall of the Taliban. The June 14 election to choose his successor has become engulfed in a prolonged dispute over fraud, with both of the two candidates claiming victory.

The United Nations has expressed fears the political standoff could trigger a spiral of instability and a return to the lawless chaos of the 1990s civil war that allowed the Taliban to rise to power.